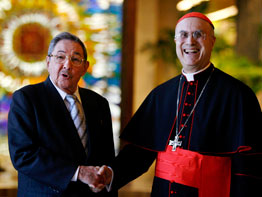 HAVANA – Cardinal Tarcisio Bertone, Vatican secretary of state, said he hoped his six-day visit had helped give “new impetus to relations between the church and the government of Cuba.”

“These relations will always be challenging, but also filled with opportunities to promote the well-being of the Cuban people,” the cardinal said in a statement to the press at the Havana airport late Feb. 26, just before he left.

The cardinal was the first foreign dignitary received by Cuban President Raul Castro, who took office Feb. 24. Castro, who had been acting as president since July 2006, replaced his brother, Fidel Castro, who announced the previous week that he was stepping down for health reasons.

Cardinal Bertone said he had wished Raul Castro “success … in this mission of service to his country” and had reaffirmed the Vatican’s commitment to “help bring the world closer to Cuba and share common ground on international issues.”

“We have spoken about the church, about Cuba and Cubans at the present moment, with particular reference to the challenges posed by the world of young people,” he said. He also said that with “greatest respect for the sovereignty of the country and its citizens, I expressed to President Raul Castro the church’s concern for the prisoners and their relatives.”

The Cuban news agency AIN reported that the cardinal and the president “examined the Cuban government’s relations with the Holy See and the Catholic Church in Cuba” and exchanged views “about issues of multilateral and international interest.”

On Feb. 25, Cardinal Bertone told a press conference that his visit to the island came at “a special, extraordinary moment” and that “Raul Castro will continue … with a vision … of development,” both in Cuba and in foreign relations.

The meeting with the new president came at the end of a packed schedule that took the cardinal to various cities around the island, following in the footsteps of Pope John Paul II’s historic visit to the country 10 years ago.

In his final remarks before leaving, Cardinal Bertone said the pastoral visits along the way had been wonderful. He particularly mentioned his visits with Cardinal Jaime Ortega Alamino of Havana and the bishops of the dioceses of Santa Clara, Santiago de Cuba and Guantanamo-Baracoa.

“I would like to see in these visits a new impetus in relations between the church and officials in Cuba,” he said.

At the airport, Cuban Foreign Minister Felipe Perez Roque asked the cardinal to convey to Pope Benedict XVI the Cuban government’s “feelings of respect” and thank him for “the way he raised a voice in support of Cuba’s independence and sovereignty” and in favor of lifting the U.S. embargo against Cuba.

“We will continue working to give impetus to relations, communication and dialogue with the Holy See and the church in Cuba,” the minister said.

Cardinal Bertone’s schedule included several public Masses and meetings with religious from various congregations working in Cuba. The first Mass he celebrated was in the plaza outside the Havana cathedral. In his homily, he asked that the church be granted greater leeway for carrying out its mission.

He also visited the Latin American School of Medicine, where 10,000 students from 30 countries, many of them Catholic, are studying. In a meeting with 400 of them, he urged the students not only to “find the physical pain” of the ill, but to discover “that spiritual pain that you can also alleviate with tact and kindness.”

In a speech at the University of Havana, Cardinal Bertone said it was necessary to find “concrete ways” for culture and ethics, church and society to come together to build a more humane world.

In Santa Clara, the cardinal dedicated and blessed the nation’s first public monument to Pope John Paul. He also celebrated a Mass at which he reminded people that the former pope’s message to the Cuban people was still relevant. He said that “the family, the school and the church must form an educational community where Cuba’s children can grow in humanity.”

The cardinal joined Cuban pilgrims in praying the rosary at the shrine of Our Lady of Charity of El Cobre, Cuban’s patroness. In Guantanamo-Baracoa, he celebrated a Mass attended by thousands of Catholics from various towns who also attended the dedication of the offices of the island’s newest diocese.

This was Cardinal Bertone’s third visit to Cuba. He traveled to the island in 2001, when he was secretary of the Congregation for the Doctrine of the Faith, and again in 2005, before becoming secretary of state.