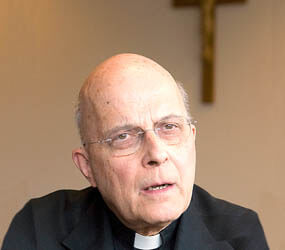 .
WASHINGTON – The president of the U.S. Conference of Catholic Bishops praised new health reform legislation for expanding health care to more Americans but said the bishops and the Catholic community will be watching closely to ensure that the new law does not expand federal funding of abortion. .

“We are apprehensive as we look to the future, even as we applaud much of the increased care that will be available,” Cardinal Francis E. George of Chicago told Catholic News Service March 23, shortly after U.S. President Barack Obama signed into law the Patient Protection and Affordable Care Act. .

“So we will watch basically and try to continue to enter into conversations as a moral voice – never as a political voice; we’ve been very careful to insist upon the moral principles that everybody should be cared for and no one should be deliberately killed,” he added. .

Cardinal George acknowledged in the interview that “the unity of the church has been wounded” in various political actions and conversations surrounding the health reform debate. The USCCB opposed the Senate bill that passed the House March 21, while some Catholic groups and members of Congress supported it. .

“We are certainly concerned about division in the church, because bishops have to be the people who are concerned about its unity, about keeping people together around Christ,” he said. .

“The bishops know that they don’t speak for every one of the 61 million Catholics in the country, but what we do is we speak for the Catholic faith itself,” he said. “And those who share the faith will gather around.” .

The cardinal said it remained to be seen whether the executive order promised by Obama would be adequate to keep the status quo on federal funding of abortion. .

Asked whether he expected church agencies to face difficulties related to abortion in the health reform law, the cardinal said, “We’ll see how that plays out in the courts.” .

“I suspect that there will be court challenges to Catholic medical practice,” he added. .

Cardinal George also rejected claims by some that the USCCB had allied itself in the health reform debate with groups that were primarily interested in advancing the Republican agenda. .

“I really don’t think that’s true,” he said. “The principles are twofold – everybody taken care of, nobody killed. And I think that moral voice, while it doesn’t correspond politically to either party, has been consistent.” .

Also March 23, the USCCB released a statement by Cardinal George on health reform that was endorsed by the bishops’ 32-member Administrative Committee. .

The statement noted that the bishops’ conference has worked for nearly a century to achieve “reform of our health care system so that all may have access to the care that recognizes and affirms their human dignity.” .

“As Catholic bishops, we have expressed our support for efforts to address this national and societal shortcoming,” it added. “Many elements of the health care reform measure signed into law by the president address these concerns and so help to fulfill the duty that we have to each other for the common good. .

“Nevertheless, for whatever good this law achieves or intends, we as Catholic bishops have opposed its passage because there is compelling evidence that it would expand the role of the federal government in funding and facilitating abortion and plans to cover abortion,” it said. .

The statement also said the new law “failed to include necessary language to provide essential conscience protections” and could leave many immigrant workers and families “worse off since they will not be allowed to purchase health coverage in the new exchanges to be created, even if they use their own money.” .

The statement expressed the belief that “new legislation to address its deficiencies will almost certainly be required.” .

Without naming any of them, the statement also praised “the principled actions of the pro-life members of Congress from both parties, in the House and the Senate, who have worked courageously to create legislation that respects the principles” outlined by the bishops. .

“They have often been vilified and have worked against great odds,” it added. .