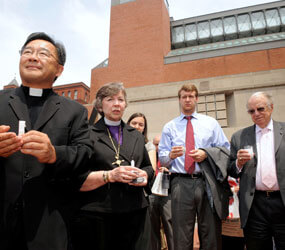 WASHINGTON – The president of the U.S. bishops’ conference called the June 10 shooting at the U.S. Holocaust Memorial Museum that left a security guard dead “appalling.”

James von Brunn, identified as an 88-year-old Holocaust denier and white supremacist, opened fire in the Washington museum and fatally shot guard Stephen Johns, 39, according to The Associated Press.

The shooting “was a deplorable act of violence and a violation of a hallowed space in our nation’s capital,” said Cardinal Francis E. George of Chicago in a statement released June 11 by the U.S. Conference of Catholic Bishops in Washington.

“This tragic incident only serves to reinforce the need for continued education throughout society against bias of every kind, but most especially racial and religious prejudice,” he said.

In a separate statement Archbishop Donald W. Wuerl of Washington said June 11 the murder was “particularly distressing given the museum’s special mission to educate our world about violence and be a living reminder of the harm that comes from hatred and anger.”

“It is our prayer that Mr. Johns rest in God’s eternal embrace and that this loss be a call to each of us for a renewed commitment to building a world of peace and respect for all people,” Archbishop Wuerl said.

The archdiocese collaborates with the museum, the bishops’ conference and other groups each year to train Catholic school educators to teach their students about anti-Semitism, the Holocaust, prejudice and Catholic-Jewish relations.

In his statement Cardinal George said that that “by preserving the memory of the 6 million Jews who died in the Shoah, the museum speaks to the consciences of all who pass through its doors and hear the powerful stories of the innocent men, women and children who lost their lives at the hands of a criminal regime.”

He noted that annually millions of the visitors to the museum “learn of the dangers of unchecked hatred and of the need to prevent genocide wherever it threatens.”

The cardinal, on behalf of the U.S. bishops, offered condolences to the Johns family and said the Catholic leaders are “committed to promoting human dignity and interreligious peace throughout our nation.”

“We echo the words of Pope Benedict XVI: ‘May the Shoah be a warning for all against forgetfulness, denial or reductionism, because violence committed against one single human being is violence against all,’” he said.