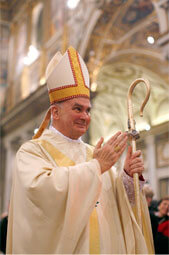 NEW YORK – U.S. Cardinal John P. Foley, pro-grand master of the Knights of the Holy Sepulcher, has been named the recipient of the Christopher Leadership Award by the Christophers.

Cardinal Foley, along with television shows, movies and books that are deemed uplifting, will be honored April 10 at a Christopher Awards dinner in New York.

Ordained a priest in 1962, Cardinal Foley has been involved in Catholic communications in its many forms. He served as editor of The Catholic Standard & Times, newspaper of the Archdiocese of Philadelphia, and for 23 years was president of the Vatican’s Pontifical Council for Social Communications, a post he held until 2007. Named an archbishop in 1984, he was made a cardinal last November.

In his current position, he guides the Knights of the Holy Sepulcher in the organization’s support of the Latin Patriarchate of Jerusalem and its response to the needs of Catholics in the Holy Land.

“It’s especially gratifying to be able to honor him for setting an example of leadership that glowingly embodies the Christopher spirit of service to God and humanity,” said a statement from Gerald M. Costello, interim executive director of the Christophers.

Cardinal Foley is only the fifth person in the 59-year history of the Christopher Awards to receive the Christopher Leadership Award, which recognizes individuals who have set a leadership example in the fields of media, church or government.

Also being honored by the Christophers this year is David McCullough, the two-time winner of the Pulitzer Prize for his biographies “Truman” and “John Adams.” He will receive the Christopher Life Achievement Award.

Mr. McCullough, in addition to his books, has become a fixture on public television for narrating or hosting such programs as “The Civil War,” “Smithsonian World,” “Abraham and Mary Lincoln: A House Divided” and “The American Experience.”

PBS’ “American Masters” will receive a Special Christopher Award. The series is in its 25th season.

Of the five TV and cable Christopher winners, three come from CBS: “Flashpoint: Kimberly Dozier and the Army’s Fourth I.D. – A Story of Bravery, Recovery and Loss,” “In God’s Name” and “Pictures of Hollis Woods.” Other winners included HBO’s “Longford” and PBS’ miniseries “The War.”

Six books for adults were named Christopher winners: “Brother, I’m Dying” by Edwidge Danticat; “The Florist’s Daughter” by Patricia Hampl; “The Invisible Wall: A Love Story That Broke Barriers” by Harry Bernstein; “The Lonely Patient: How We Experience Illness” by Dr. Michael Stein; “A Long Way Gone: Memoirs of a Boy Soldier” by Ishmael Beah; and “A Slave No More: Two Men Who Escaped to Freedom” by David W. Blight.

– Preschool: “Taking a Bath With the Dog and Other Things That Make Me Happy” by Scott Menchin.

– Ages 6-8: “How Many Seeds in a Pumpkin?” by Margaret McNamara, illustrated by G. Brian Karas.

– Ages 8-10: “Owen & Mzee: The Language of Friendship” by Isabella Hatkoff, Craig Hatkoff and Paula Kahumbu, with photos by Peter Greste.

– Young adult: “Diamonds in the Shadow” by Caroline B. Cooney.

Maryknoll Father James Keller founded the Christophers in 1945 with the purpose of using media to encourage individuals to use their God-given talents to make a positive difference in the world, by bringing Gospel values into the mainstream of life. The Chinese proverb “It’s better to light one candle than to curse the darkness” guides its publishing, radio and awards programs.