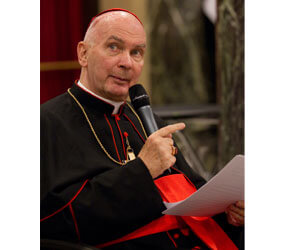 The Equestrian Order of the Holy Sepulcher may provide support for the bricks-and-mortar holy places in the Holy Land, but just as important – maybe more so – is its support for the living stones in the region, the living descendants of the original followers of Christ, says the recently retired head of the order.

Cardinal John P. Foley, a Pennsylvania native who led the order from 2007 until he retired earlier this year for health reasons, said the principal functions of the Order of the Holy Sepulcher are first to develop the spirituality of its 30,000 members spread across the globe, and then to stimulate their support, financial and otherwise, for the sites in the Holy Land: Israel, Palestine, Jordan and Cyprus.

Pope Benedict XVI named Archbishop Edwin F. O’Brien the new pro-grand master of the order Aug. 29; he will take on his new role, based at the Vatican, while remaining apostolic administrator of the Archdiocese of Baltimore until his successor is installed.

In a telephone interview with The Catholic Review from his home in Darby, Pa., Cardinal Foley said Archbishop O’Brien will take on responsibility for leading the knights and ladies of the order, and his experience has well-equipped him to handle these “primary works” of the grand master.

The grand master visits not only the traditional holy shrines in Jerusalem and Bethlehem, the care of which is under the auspices of the Franciscans of the Holy Land. The order also is greatly concerned with hospitals, schools and other sites run by the Latin Patriarchate and other organizations.

The cardinal said that he had to travel extensively as grand master. He missed two trips to Asia toward the end of his tenure due to his health, which he said told him it was time to give up the post. He said the archbishop’s global travel as head of the Archdiocese for the U.S. Military Services would provide a good background for the taxing kind of travel needed.

“He’s a wonderful speaker, and a great thinker,” Cardinal Foley added about Archbishop O’Brien, calling him “a person who would attract enthusiasm.”

Cardinal Foley said the global reach of the Order of the Holy Sepulcher continues to grow. It is already present in almost all of Europe and most Scandinavian countries. Members are in a number of countries in Central and South America, such as Mexico, Brazil, Columbia and Ecuador, and the order could be extended to other countries there. The cardinal noted that the order has lieutenancies, or local chapters, in almost all the countries that were formerly behind the Iron Curtain. Recent jurisdictions were also opened in Russia, South Africa and India.

Michael LaCivita, communications director for the Catholic Near East Welfare Association, an agency of the Holy See that works extensively in the region and collaborates closely with the Order of the Holy Sepulcher, said Cardinal Foley was instrumental in extending the reach of the order to the Latin church in Egypt, Lebanon and Syria. That is significant, he said, “because while the Latin Church is tiny, tiny, tiny, in those areas, the sisters and priests do incredible things in schools, hospitals and churches there.”

La Civita, himself a knight of the Holy Sepulcher, also said that Cardinal Foley reanimated the order, and brought a new sense of professional leadership. “He brought to it a real strength and vigor.”

As grand master, Archbishop O’Brien will eventually travel around the world to stimulate new membership and invest (formally install) new members of the order. He said at a news conference that initially, he will split his time between Baltimore and the order’s headquarters in Rome, as well as scheduling a visit to the Holy Land.

Catholics in the Holy Land, Cardinal Foley noted, are really “a minority within a minority.” Because most in the region are either Jewish or Muslim, so few are Christian; of those who are Christian, a minority are Catholic.

“Our principle task is to help the living stones, not just help the historic shrines. … These (living stones) are the descendants of the original followers of Jesus,” he said.

In light of that, one of the important ministries the Order of the Holy Sepulcher supports is Bethlehem University, a Catholic Christian university in the West Bank open to students of all faiths, but with a predominantly Muslim student population.

“Catholic education nurtures respect,” Cardinal Foley said. “It does that by getting people to learn together. …

For those who are educated and have a way out, “The temptation is to leave the Holy Land,” he said. “It’s easier to get authorization to leave for Europe or the United States, but we’d like as many as possible to stay and contribute to a peaceful society.”

Cardinal Foley said the knights and ladies of the order annually give at least $8 million to works of charity in the Holy Land; the total was $10 million last year. “That’s considerable,” he said.

He said he knows it is a sacrifice for Archbishop O’Brien and the Archdiocese of Baltimore to make this change, but that it will be helpful for the church.

He thinks the appointment is a sign of the admiration Pope Benedict has for the work Archbishop O’Brien has done as Archbishop of Baltimore, and also his tenure in the Military Archdiocese, and his time leading seminaries in New York and Rome.

“I think it’s a sacrifice to leave Baltimore for Rome,” Cardinal Foley said. However, he added, throughout his priestly career, Archbishop O’Brien has “made greater sacrifices before. That’s what happens when you say, ‘yes’ to the Lord.”