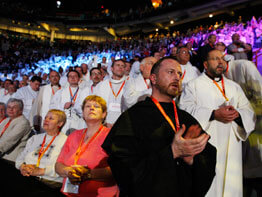 QUEBEC CITY – When people pause and question the purpose of their lives, they “yearn for a spiritual answer,” said Slovakian Cardinal Jozef Tomko at the opening Mass of the 49th International Eucharistic Congress.

“So many people are moving here and there – 6.5 billion people busy working to improve their living conditions,” said Cardinal Tomko, Pope Benedict XVI’s representative to the congress.

Why are “we plunged on this road,” he asked the crowd of more than 10,000 cardinals, bishops, priests, nuns and laypeople from around the world gathered for the June 15 Mass in Quebec City’s hockey arena.

A eucharistic congress “allows us to encounter” these questions and “examine the meaning of our life and death,” said the cardinal.

“What does it mean to be the gift of God” and what is the Eucharist, he asked, referring to the theme of the June 16-21 congress, “The Eucharist, Gift of God for the Life of the World.”

Jesus is the gift of God, he “is the food that feeds us and fulfills us and allows us life in eternity,” said Cardinal Tomko. “The Eucharist is a person, not an object, not a dead gift. Maybe we should ask not what is the Eucharist, but who is the Eucharist?”

The answer to this question, Cardinal Tomko said, is Jesus in the sacramental form of bread and wine “to indicate he wanted to become our food and sustain our life.”

The cardinal also said Jesus’ words at the Last Supper, “Do this in memory of me,” are not only a memorial but a command to do what he has done and to use those same words at Mass.

In this way, Jesus’ sacrifice is perpetuated throughout history, he said.

“The Sunday Mass is a memorial, my brothers and sisters, and we cannot lose this Sunday Mass,” he said.

During the homily, Cardinal Tomko presented Quebec Cardinal Marc Ouellet with a large, ornate gold crosier as a gift from Pope Benedict. The cardinals embraced as the crowd applauded. Cardinal Tomko said Pope Benedict was with the congress “full-heartedly” in prayer.

The history of Quebec, which is celebrating the 400th anniversary of its founding this year, and the global participation of the congress were highlighted throughout the more than three-hour Mass.

More than 12,000 people are participating in the conference’s weeklong conferences, lectures and liturgies. Although 75 percent of the participants are Canadians, pilgrims came from more than 70 countries.

As the cardinals and bishops processed into the arena, the crowd applauded and stood to greet them. A group of more than 50 Mexican pilgrims chanted “Mexico, Mexico” when they spotted their local bishop in the procession. Hearing their welcome, the bishop turned to them, smiled and waved.

During the presentation of the gifts, representatives from Africa, Asia, Oceania, Europe and Latin America offered rice, grains, wheat and fruit to represent their regions’ cultural gifts. Several chalices were presented at the large, circular altar in the center of the arena; among them was the chalice given to the first bishop of Quebec by a French king. The silver, locally made modern chalice for the eucharistic congress also was presented.

At the end of the Mass, the Eucharist was placed in a monstrance, which was hoisted atop the youth-inspired Ark of the New Covenant – an icon-covered chest that had been carried on foot to the more than 70 dioceses and eparchies in Canada. Four clergymen carried the ark and monstrance outside of the arena to one of the several eucharistic adoration chapels, where pilgrims can pray throughout the week.