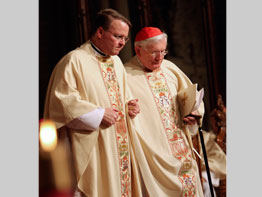 NEW YORK – Cardinal Avery Dulles was remembered as a theologian, mentor, counselor and “a priest’s priest” at his funeral Dec. 18 at St. Patrick’s Cathedral in New York.

At the request of Pope Benedict XVI, Cardinal Edward M. Egan of New York was the principal celebrant of the Mass. Five other cardinals, including Cardinal William H. Keeler, retired archbishop of Baltimore, 20 archbishops and bishops and more than 125 priests concelebrated. Among the mourners were Archbishop Demetrios, primate of the Greek Orthodox Church in America, and representatives of ecumenical organizations.

Cardinal Dulles died Dec. 12 at the age of 90. Since 1988, he had been a professor of religion and society at Jesuit-run Fordham University in New York. In 2001, the Jesuit priest was the first American to be named a cardinal without first being a bishop.

Cardinal Egan, who was elevated by Pope John Paul II at the same consistory, said Cardinal Dulles’ life story mixed triumph with suffering. He described a crucifix he saw as a seminarian in Umbria, Italy, that showed Christ’s face as joyful or tortured, depending on the viewer’s position. He said, “Death will always have two faces and neither should be ignored.”

Cardinal Egan said Cardinal Dulles’ triumphs included an unequaled career as an acclaimed American Catholic theologian and author of 23 books and more than 800 articles on “every aspect of theology.” He taught theology at colleges and seminaries in the United States and overseas, advised and wrote for departments at the Vatican and the U.S. Conference of Catholic Bishops and served as the president of both the Catholic Theological Society of America and the American Theological Society.

Cardinal Dulles was raised a Presbyterian in a prominent family noted for its public service. His father, great-grandfather and great-uncle served as secretary of state in three presidential administrations. Cardinal Egan said Cardinal Dulles’ conversion to Catholicism and his decision to seek the priesthood “entailed a certain measure of pain” in the reaction of his family.

His physical suffering related to polio he contracted during World War II. He recovered from the initial bout, but developed post-polio syndrome 20 years before he died and was paralyzed and unable to speak in recent months.

“Suffering and diminishment are not the greatest of evils, but are normal ingredients in life, especially in old age. They are to be accepted as elements of a full human existence. Well into my 90th year I have been able to work productively. As I become increasingly paralyzed and unable to speak, I can identify with the many paralytics and mute persons in the Gospels, grateful for the loving and skillful care I receive and for the hope of everlasting life in Christ. If the Lord now calls me to a period of weakness, I know well that his power can be made perfect in infirmity. ‘Blessed be the name of the Lord!’ ”

“I told him it was a case of the lame pushing the lame, and the smile that came across Cardinal Dulles’ face was very similar to what I saw on the face of the crucifix a half-century earlier,” he said.

Jesuit Father David J. Ciancimino, provincial of the New York province of the Society of Jesus, spoke at the end of the funeral Mass. He acknowledged the many tributes that called Cardinal Dulles a theologian, mentor and counselor, but said he was “first and foremost a man in service to the church, a man who shunned the limelight.”

“To Jesuits, he was our older, wiser brother,” who prepared his own breakfast, did his own laundry, decorated the Christmas tree and took his place in the Mass rotation in each place he lived, Father Ciancimino said. “He modeled the Jesuit life in genuine service.”

Jesuit Father Drew Christiansen, editor-in-chief of America magazine, said Cardinal Dulles was a “theological communicator. He wrote in a way that most people could understand. He was a man for whom details were important. So often they’re missed in the sound-bite (reporting) of today.”

He said Cardinal Dulles demonstrated how a scholar can hand on the church tradition and refine the understanding of it for a contemporary audience.

Father Christensen said that commentators who try to label Cardinal Dulles have perhaps neglected his early writings. He said, “The sources of theology always escape precise articulation, because what we’re drawing on is much greater than we can put into words.”

Father James Massa, executive director of the USCCB Secretariat for Ecumenical and Interreligious Affairs, was a student of Cardinal Dulles. He said Cardinal Dulles was an encouraging, patient and pastoral mentor who encouraged him to study the ecclesiology of Cardinal Joseph Ratzinger, who later became Pope Benedict.

Father Massa said Cardinal Dulles’ evolving theological position was “evidence of a real dynamism that took into account new realities in the church.” As an example, he cited Cardinal Dulles’ reflections on ecumenism. “Early on, he was more hopeful about the possibility of convergence on doctrinal matters, like the Petrine ministry, but later he was more sober about that,” he said.