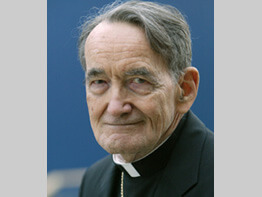 WASHINGTON – Cardinal Avery Dulles, a Jesuit theologian who was made a cardinal in 2001, died Dec. 12 at the Jesuit infirmary in New York, Murray-Weigel Hall. A cause of death was not released but he had been in poor health. He was 90 years old.

Cardinal Dulles had been the oldest living U.S. cardinal. His death was announced by the New York-based Jesuit provincial’s office. Funeral arrangements were pending.

Cardinal Dulles gave what was described as a farewell address in April, delivering the Laurence J. McGinley lecture at Jesuit-run Fordham University. In the presentation Cardinal Dulles reconfirmed his faith, his orthodoxy, his spirituality and his commitment to the Society of Jesus.

He also offered a final word against the materialism, relativism, subjectivism, hedonism, scientism and superficial anti-intellectualism he said is found in modern society.

Later that month he had a private meeting with Pope Benedict XVI during the pontiff’s visit to New York.

“It was a lovely meeting,” said Dominican Sister Anne-Marie Kirmse, the cardinal’s executive assistant for the past 20 years. “The pope literally bounded into the room with a big smile on his face,” she told Catholic News Service.

The session was called a significant meeting of “two of the leading Catholic theologians who interpreted Vatican II for a generation,” by Father James Massa, executive director of the U.S. Conference of Catholic Bishops’ Secretariat of Ecumenical and Interreligious Affairs.

Pope John Paul II, who began the practice of naming as cardinals priest-theologians who were already past age 80 and therefore ineligible to vote in a conclave, included Cardinal Dulles in the group of cardinals created in 2001.

Cardinal Dulles, the son of former Secretary of State John Foster Dulles and nephew of onetime CIA director Allen Walsh Dulles, both of whom served in the Eisenhower administration, became known in his own right for his groundbreaking 1974 work “Models of the Church” – one of 22 books published under his name – in which he defined the church as institution, mystical communion, sacrament, herald, servant and community of disciples, and critiqued each.

Born Aug. 24, 1918, Cardinal Dulles was the grandson of a Presbyterian minister. He joined the Catholic Church as a young man after he went through a period of unbelief.

“In becoming a Catholic, I felt from the beginning that I was joining the communion of the saints,” he said at a 2004 lecture in New York on author C.S. Lewis. “I found great joy at the sense of belonging to a body of believers that stretched across the face of the globe.”

He entered the Catholic Church in 1941 while a student at Harvard Law School. He served in the Navy in World War II, then entered the Jesuits after his discharge in 1946. He was ordained to the priesthood in 1956.

Cardinal Dulles had been the Laurence J. McGinley professor of religion and society at Fordham since 1988. He also had taught in Washington at the former Woodstock College, now folded into Georgetown University, from 1960-74, and The Catholic University of America, 1974-88. He had also been a visiting professor at Catholic, Protestant and secular colleges and universities.

Cardinal Dulles had two other relatives who served as secretary of state: great-grandfather John W. Foster and great-uncle Robert Lansing.

The cardinal was a frequent lecturer on religious and church matters well into his 80s.

In a 2005 lecture, Cardinal Dulles said, “The true spirit of the (Second Vatican) Council is to be found in, and not apart from, the letter” of the council texts. “When rightly interpreted, the documents of Vatican II can still be a powerful source of renewal for the church.”

Also in 2005, he said the 1551 teaching of the Council of Trent on the real presence of Christ in the Eucharist “remains today as normative as ever.” The council described the presence with three adverbs – “truly, really and substantially” – that are “the keys that open the door to Catholic teaching and exclude contrary views,” he said.

In a New York lecture on the start of the 2004-05 Year of the Eucharist, Cardinal Dulles said Catholics must be aware “the church is in dire need of renewal.” Although “holy in her head and in her apostolic heritage,” the church remains “sinful in her members and in constant need of being purified,” he said, adding many Catholics are ignorant of church teachings, and a few even reject the teachings.

At the first National Catholic Prayer Breakfast in Washington in 2004, Cardinal Dulles said that although for Americans “there is nothing more sacred to our lives than the idea of liberty” the “negative pull” of freedom from responsibilities is drawing the nation into immorality.

“Once freedom operates in a moral vacuum, it becomes meaningless,” he said. The United States has proven successful at overthrowing tyrannical regimes, Cardinal Dulles said, but seems unable to create anything more than a “moral vacuum, which is painfully filled by the demons of fraud, drugs and violence.”

He said, for example, in post-Taliban and post-communist societies “too many citizens begin to hanker for a return of the ousted rulers who provided at least a minimum of order and security.”

In another 2004 talk Cardinal Dulles called for “a rebirth of apologetics,” the defense of Christian faith by reason, because “the time is ripe, the need is urgent.”

But he called for an apologetics centered on “the living testimony of believers” rather than the traditional arguments from philosophy and historical science, one focused not on the traditional question of “how we get to God” but “how God comes to us.”

“The apologetics of personal testimony is particularly suited to the genius of Catholicism,” he said. “Such testimony invites us not only to individual conversion but to communion with the whole body of believers.”

At the annual Red Mass for the legal profession in Washington in 2003, the cardinal said in his homily that while they cannot legislate virtue, they should have “a sense of the importance of moral convictions and moral training for the health of our society.” He stressed that “law and spirit belong together” and are “as inseparable as body and soul.”

“Law, at least civil law, is a human achievement,” Cardinal Dulles said, “but the spirit, if it is to be upright, depends chiefly upon the grace of God who can transform hearts and fill them with his love.”

At an 80th birthday Mass in his honor in 1998, then-Father Dulles told the assembly, “My own adult life has constantly revolved about faith. … Even in my days as an undergraduate student, my interest was absorbed in the search for faith.”