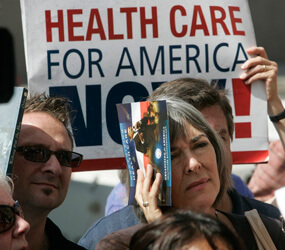 WASHINGTON – Although amendments to a House health care reform bill made some “helpful improvements” in protecting life and conscience, some “unacceptable features” remain that must be removed, the chairman of the U.S. bishops’ pro-life committee told House members Aug. 11.

Cardinal Justin Rigali of Philadelphia, who heads the bishops’ Committee on Pro-Life Activities, said the health reform bill approved by the House Energy and Commerce Committee July 31 would make a “radical change” in U.S. abortion policy by making abortion a mandated benefit in the public health insurance plan that would compete with private insurers and by allowing the expanded use of federal funds to pay for abortions.

He said the committee “created a legal fiction, a paper separation between federal funding and abortion” through which those in the public plan and in private insurance plans that cover abortion would pay an out-of-pocket premium of at least $1 a month to cover abortions beyond those eligible for federal funds under the Hyde amendment.

The Hyde amendment, enacted into law in various forms since 1976, prohibits federal funding of abortions except in cases of rape, incest and danger to the mother’s life.

Cardinal Rigali said the separation of funds in the reform bill “is an illusion” because “funds paid into these plans are fungible, and federal taxpayer funds will subsidize the operating budget and provider networks that expand access to abortion.”

In addition, he said, “those constrained by economic necessity or other factors to purchase the ‘public plan’ will be forced by the federal government to pay directly and specifically for abortion coverage … even if they find abortion morally abhorrent.”

The cardinal had praise, however, for amendments to the bill that stipulate that health reform legislation will not pre-empt certain state laws regulating abortion and will not affect existing federal conscience protections on abortion.

He also thanked the committee for approving an amendment “prohibiting governmental bodies that receive federal funds under this act from discriminating against providers and insurers who decline involvement in abortion.”

Cardinal Rigali’s comments came in an Aug. 11 letter to each House member. He urged that attention be paid to the priorities and concerns for health reform outlined in an earlier letter from Bishop William F. Murphy of Rockville Centre, N.Y., chairman of the bishops’ Committee on Domestic Justice and Human Development.

The U.S. bishops “have long supported health care reform that respects human life and dignity from conception to natural death; provides access to quality health care for all, with a special concern for immigrants and the poor; preserves pluralism, with respect for rights of conscience; and restrains costs while sharing them equitably,” Cardinal Rigali said, reiterating points from Bishop Murphy’s letter.

“Much-needed reform must not become a vehicle for promoting an ‘abortion rights’ agenda or reversing long-standing policies against federal funding and mandated coverage of abortion,” the cardinal said. “In this sense we urge you to make this legislation ‘abortion-neutral’ by preserving long-standing federal policies that prevent government promotion of abortion and respect conscience rights.”

Meanwhile, one Christian leader expressed confidence Aug. 10 that supporters and opponents of abortion would reach agreement to keep any health reform plan approved by Congress abortion-neutral and to include conscience protections.

“People on both sides of the debate have agreed to these principles,” said the Rev. Jim Wallis, executive director and CEO of Sojourners, a progressive evangelical organization that addresses justice issues. “Neither side should try to win political gains on abortion in the health care reform debate.”

Rev. Wallis was speaking during a conference call for media announcing a 40-day campaign to mobilize the faith community on health care reform. The effort includes a national television ad, a series of prayer vigils and rallies around the country, an Aug. 19 conference call with President Barack Obama and faith leaders, a national health care Sabbath weekend Aug. 28-30 and other events after Congress returns to work in September.

Rev. Wallis, a member of Obama’s Advisory Council on Faith-Based and Neighborhood Partnerships, said Obama has said he does not think abortions should be paid for with public funds in health reform legislation and supports the inclusion of conscience protections.

“I’m confident that we can help shape a bill that does not use abortion to scuttle health care reform,” the Sojourners leader said.

But he said that will require “looking closely at the legislative conversations” as various versions of health reform legislation are reconciled in the House and Senate.