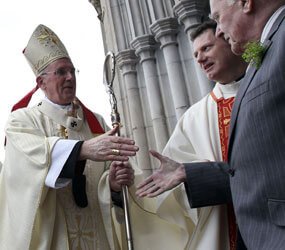 DUBLIN, Ireland – Cardinal Sean Brady of Armagh, Northern Ireland, apologized during a St. Patrick Day homily for his role in the case of a priest accused of sexual abuse.

The cardinal said March 17 during Mass at St. Patrick Cathedral in Armagh that he wanted to “apologize to all those who feel I have let them down.”

“I want to say to anyone who has been hurt by any failure on my part that I apologize to you with all my heart,” he said.

“Looking back, I am ashamed that I have not always upheld the values that I profess and believe in,” he continued.

The apology came after the cardinal acknowledged March 14 that he never told police about statements from victims that he collected about a pedophile priest in 1975.

“This week a painful episode from my own past has come before me,” Cardinal Brady said during the Mass which was broadcast throughout the country. “I have listened to reaction from people to my role in events 35 years ago.”

The cardinal also called on his fellow bishops to “acknowledge our failings.”

“The integrity of our witness to the Gospel challenges us to own up to and take responsibility for any mismanagement or coverup of child abuse,” he said. “For the sake of survivors, for the sake of all the Catholic faithful as well as the religious and priests of this country, we have to stop the drip, drip, drip of revelations of failure.”

Meanwhile, Dublin’s Archbishop Diarmuid Martin supported a call for an examination of every Catholic diocese in Ireland.

He said funding a countrywide probe may not be the best way to spend money intended to improve child protection, but “it may be the only way” to expose the full extent of the abuse and how it was handled by the Catholic Church.

Victims of clerical abuse have been calling for an inquiry similar to that of the independent Murphy Commission to be undertaken nationwide. The commission investigated the handling of abuse in the Archdiocese of Dublin and released its findings in November.

So far the Irish government has resisted such calls.