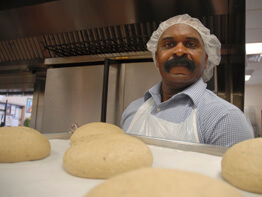 DETROIT – After 23 years in food service, from training as a sous-chef at Detroit’s now-abandoned Book-Cadillac Hotel to working in prison kitchens, Edward Collins felt he had something to offer after his fourth release from prison on robbery and theft charges – if he could find someone willing to take a chance.

“I was ready to give back. I’d been taking for so long,” said Collins, who had spent 33 of his 58 years incarcerated.

He knew nothing about the work of the Capuchins when he went to the soup kitchen seeking a bus pass so he could look for a job. He had no idea that during the Great Depression the poor of Detroit knocked on the doors of the monastery on Mount Elliot asking for bread.

These days, the Capuchins aren’t only handing out bread. They are helping some of the most unemployable by teaching them to bake bread and other pastries. Or, as Collins puts it, “Instead of just feeding us, they are saving generations.”

Capuchin Father Ray Stadmeyer took a chance on Collins – and it ended up being a new chance for himself as well.

For nine years he’s been the chaplain of the two soup-kitchen sites in Detroit. In recent years, he says, passing out bread and meals to those who were hungry didn’t seem to be enough. He kept reminding himself that Jesus also changed and healed lives.

Father Stadmeyer, 52, admits he was “feeling pretty exhausted seeing the plight of people and not seeing any changes in their lives.” One experience in particular weighed heavily on him.

“It was a holiday and a man came in and said his grandfather had taken him here, and now he was taking his grandchild. He said it like that was a good thing. But it’s so sad. We’d been thinking about this, but that really drove it home. We needed to do something that’s proactive in people’s lives.”

In 2006, a woman who owned a bakery contacted Father Stadmeyer offering to help some of the homeless people learn how to bake. For a few Saturdays she taught cookie-making and then bread-baking.

“Then we had the thought (that) maybe we could sell them to the monastery (at Sunday Mass). That Easter (2006) we made $230 selling these little loaves of bread and thought that was the greatest thing! We were like, ‘Oh, I can’t believe we made that much money,’” he said, laughing at the memory. The bakery owner soon left, but gifted them with her cookbooks.

By then Father Stadmeyer knew there was something about baking and changing lives. That’s when Collins came along.

After volunteering to bake a few Saturdays, the former prisoner found something he’d been seeking. “To be able to come here and be accepted, well, it means a lot to a guy to be accepted,” Collins said.

His experience in the food industry “really changed the whole tone for us,” Father Stadmeyer said. It also changed the focus of the baking employment project and became the foundation for a year-old program called ROPE, which stands for Reaching Our Potential Everyday.

There are now four men involved; three of them have been incarcerated and one just left an alcohol rehabilitation program. While Collins bakes full time, the other three bake part time and spend the rest of their time working on their lives with the help of counseling, Alcoholics Anonymous or Narcotics Anonymous, or completing their education.

They typically bake pies, cookies, breads, muffins and rolls, selling the baked goods at parishes throughout the Archdiocese of Detroit on weekends. The four men, all formerly homeless, live as a community in a house that opened in November. Its cost is paid for by part of what they earn selling baked goods.

Each of the men has made a one-year commitment to ROPE, which Father Stadmeyer said is “really pretty open-ended.” There have been a few, he said, who tried it and then left.

Volunteers from local parishes come in each week wrapping baked goods and working in the kitchen. The volunteer program “just evolved,” the Capuchin said. “They have been a godsend.”

The goal of ROPE is not about running a bakery, though their own full-time bakery is hopefully in the near future, he said. Rather, the goal is instilling healthy relationships and community.

Father Stadmeyer says the reason he gives ex-cons and addicts a chance is “because God gives them a chance. And that’s where Jesus would be going – to the people struggling the most to get it right.”

He said the program addresses “a justice issue. I think really it’s a healing ministry. In some ways they are being healed through their self-esteem – and in relationships, definitely.

“To come down on a Saturday and see the different groups of people here, folks from the suburbs volunteering with these guys, it’s a Eucharist in a way. It’s a sharing. They become a part of each other’s lives. Week after week,” he said.