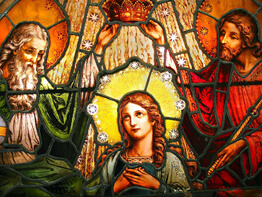 For almost 50 years the historic windows that were once displayed in the chapel at St. Mary’s Industrial School, Baltimore, have been sitting in storage at Our Lady of Victory, Arbutus. The parishioners and Father Timothy Klunk, pastor, are now in their second year of a capital campaign to restore, preserve and install the priceless windows into a new gathering space for the parish.

“We have salvation history stained glass,” said Father Klunk. “They are museum quality.”

The seven windows were given to Our Lady of Victory, which was started in 1952 by parishioners who met at St. Mary’s Industrial School before building a church down the street, when the school was closed and the chapel was demolished.

For the last two years the parish has been collecting pledges and contributing money toward a new gathering space in front of the parish and to renovate the modern church.
“God is the master builder,” said Father Klunk. “We must step out in faith to see where God wants this to go.”

Father Klunk said this gathering space will be a place for small socials, faith formation groups and more room for funerals and weddings. At the moment some of the organizations are having a hard time fitting in the meeting spaces allotted to them, this new space would allow for organizations to continue to grow and function.

“It will provide people with a place to meet before they worship and after they worship,” said Father Klunk how said he hopes to, “build community through the gathering space.”
The front of the space will have large windows where five of the stained glass, with reflects the images of Jesus’ life until his death, will be place.

“We want to bring these windows back into the light,” said the soft spoken pastor.
Steve Bruza, a parishioners and active participate in the research of the parish and historic window, said he believes the gathering place with be a great connecting space for his fellow parishioners and visitors to the parish.

“The stronger the parish the stronger the people,” said Mr. Bruza, who remembers driving by the St. Mary’s chapel when it was torn down many years ago. “These windows inspired people years ago and now they are doing that again.”

So far the parish of some 900 registered families has collected $900,000 in pledges and more than $400,000 of that pledge money has been collected. The parish must obtain 1.2 million before they are able to move forward with the building plans.

“We have had an immense response by the people,” said Father Klunk who said almost 50 percent of his parishioners have contributed to the campaign.