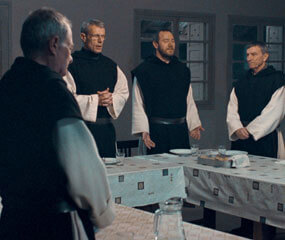 WASHINGTON – “Of Gods and Men,” the Cannes Film Festival grand prize-winning feature now debuting across the country, had a “monastic adviser” on the set to help faithfully depict the lives of the French monks whose story is at the heart of the movie.

Henry Quinson, who lived for six years at a Cistercian monastery in France, knew two of the monks portrayed in the film.

The subject matter is not typical for a movie: the lives of seven Trappist monks in turmoil-ridden Algeria in the mid-1990s. All seven were kidnapped in 1996 and ultimately beheaded.

“It’s very difficult for me to make a movie that would be cheap – the kind of movie that would only be about blood,” Quinson told Catholic News Service in a Feb. 18 telephone interview from Marseilles, France, where he lives. “It would be very far away from the spirit of the people I knew.”

Xavier Beauvois, who directed and co-wrote “Of Gods and Men,” approached Quinson after seeing his memoir on monastic life; Quinson had earlier translated into French an English-language book on the murdered monks.

Quinson said Beauvois e-mailed him asking, “I need someone to be with me on this movie. … When it’s written (in the script) ‘the monks pray,’ how are they dressed? What do they do? Do they sing? I need someone who knows the monastic life from the inside.”

Quinson, who had been considering making a movie himself on the French Trappists, agreed to help Beauvois.

“My little job,” Quinson said, “was to tell their story, … be faithful to the brothers, and reach out to as many people as we can.”

Quinson said Algeria in the mid-1990s was struggling through many of the same issues today roiling Muslim-majority nations in North Africa and the Middle East.

“The murder of the monks was a turning point in Algeria. That doesn’t mean there’s no violence in Algeria today. Things are shaking up in Algeria right now,” he told CNS. “What is true is that no Christians were murdered after ‘96, and I think that Algerian people started to come to terms with the idea that violence is not going to beget any bright future and another way to solve the problems would not be terrorizing people, not only for their religious faith – most people who were murdered in Algeria were Muslims themselves – but questions were raised about who murders whom.”

Quinson said, “For the two months when we shot the movie in Morocco, I was there every day. Beauvois would have me very close to him – ‘Henry, are you sure this is right?’ – to re-create the atmosphere of the monastery.”

“I found all the songs, and all the dialogue, which makes up about 15 percent of the movie. I rewrote one of the speeches about being a martyr, which was a very important part of the movie,” Quinson told CNS. “We spent several days in a monastery” coaching the actors, working with Beauvois on the setting, and re-creating the monastery in Morocco for filming.

Quinson, the son of a banker, was born in New York City but has lived in Europe, primarily France and Belgium, since age 5.

“I’m not a real monk in the sense that I’m not a part of a monastic order. But I’m celibate, working within the church,” said Quinson, who turns 50 March 8. “I worked as teacher here in Marseille. I managed to have part-time jobs so I would have a lot of time to help out the neighbors” in a Muslim enclave in Marseille with “a lot of educational help and now a lot of financial help. … A lot of these kids were considered not very able to go far in their studies” for academic or financial reasons.

Quinson said that, before filming, he had gotten advice from “a big French film producer” he would not name that “this story with seven monks being killed is not going to sell.” Cannes awards and international acclaim later, the producer’s opinion is being debunked.

In his review of “Of Gods and Men,” John Mulderig of CNS’ Media Review Office called the movie “a restrained religious masterpiece and a memorable viewing experience.”

The film received a classification of A-III – adults – for brief gory violence, some unsettling images and a single instance each of rough and crass language. But Mulderig said older teens could profit from seeing the movie.

Director Beauvois, according to Mulderig, “finds a path to the heart of the Gospel through simplicity, a compassionate sense of brotherhood and an atmosphere of prayer enriched by sacred music and potent silence.”