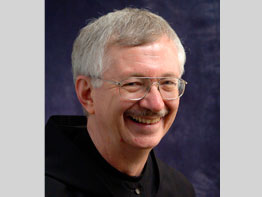 COLLEGEVILLE, Minn. – Two months after resigning as president of St. John’s University so he could focus on his treatment of malignant melanoma, Benedictine Brother Dietrich Reinhart died Dec. 29 at age 59.

The first nonordained person to hold the position, Brother Dietrich stepped down from his post Oct. 21. He had been university president since 1991.

A funeral Mass was to be celebrated Jan. 6 in the St. John’s Abbey Church in Collegeville. Benedictine Abbot John Klassen was to preside, with burial to follow in the abbey’s cemetery.

Upon Brother Dietrich’s resignation, James Frey, chairman of the university’s board of regents, announced the establishment of the Benedictine Institute at St. John’s University and said the monk had agreed to serve as its founding director and hold a newly endowed chair of Benedictine culture and life, if his illness allowed.

During his 17 years as president Brother Dietrich saw the university’s enrollment grow by nearly 14 percent and its endowment quadruple from $36 million to more than $145 million. Other significant undertakings during his tenure included the designation, with St. John’s Abbey, of the entire 2,700-acre university campus as an arboretum and the commissioning of calligrapher Donald Jackson to handwrite and illuminate The Saint John’s Bible, the first such endeavor by a Benedictine monastery in 500 years.

A native of Minneapolis, Brother Dietrich came to St. John’s University in 1967 planning to study government in preparation for a law career. His plans changed as an undergraduate student. In 1971 he graduated with a degree in history and entered the monastery the following summer, professing vows as a Benedictine monk a year later on July 11, 1972.

Born Thomas Edward Reinhart, he asked for the name of Dietrich in honor of Dietrich Bonhoeffer, a German Lutheran theologian who participated in the resistance movement against Nazi forces.

Brother Dietrich earned master’s and doctoral degrees in history from Brown University in Providence, R.I. The school offered him a fellowship, allowing him to teach and conduct research.

He subsequently joined the history department at St. John’s in 1981 as an adjunct professor and became an assistant professor three years later. He was elected dean of the College of Arts and Science in 1988, holding that position until his selection as president.

Meanwhile at the abbey, Brother Dietrich was asked to be director of liturgy in 1983 and led a committee on the revision of the Liturgy of the Hours at St. John’s Abbey, a multivolume set which the community continues to use at public prayer services. He also co-authored with Benedictine Father Michael Kwatera a book of prayers for grace at meals.