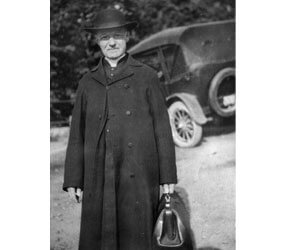 The news of the Holy Cross brother’s Oct. 17 canonization, one of six announced by Pope Benedict XVI Feb. 19, was met with elation by the members of the church in Montreal.

“The announcement of the canonization of Brother Andre is the best thing that could have happened this year for the church of Montreal,” Cardinal Jean-Claude Turcotte said in a statement. “I have always been impressed by this man, both a humble man and a visionary, a man of deep faith, an example of determination still relevant today in 2010.

“For us, he is a symbol of victory. It is like winning a gold medal at the Olympics,” the cardinal said later. “His sainthood is important not only for Catholics, but for all people who believe in God and who come to his basilica to find peace, even if they don’t use the same name for God as we do.”

Born Alfred Bessette, Brother Andre was the founder of St. Joseph’s Oratory in Montreal, the largest shrine dedicated to St. Joseph in the world. The shrine sits atop Mount Royal overlooking the northern half of the city.

Two days after Pope Benedict’s announcement the oratory had no lack of pilgrims filing past Brother Andre’s tomb.

One young woman, who would not reveal her name, stopped and prayed at the various stations depicting St. Joseph’s life that lead to Brother Andre’s crypt.

“I come often because I’m a believer and it’s renewing,” she said.

Like many people who stopped at Brother Andre’s tomb, she was not there because of the news, but because she found tangible peace and a deepening faith experience in her visits. The oratory is a place where more than 2 million people flock every year.

Father Jean-Pierre Aumont, provincial superior of the Congregation of Holy Cross in Canada, said, “(Brother Andre) is the first member of our community declared a saint throughout the world and for our congregation, this declaration is a real source of pride. But it invites us as well to follow Brother Andre’s example, follow his footsteps simply, with a vision and conviction.”

To the people of Quebec, he was “one of us,” somebody with simplicity and a great heart for others, Father Aumont said.

As the oratory’s rector for 12 years, Father Aumont said he has heard countless stories of how Brother Andre touched people’s lives before his death Jan. 9, 1937, and how he continues to reach people to this day.

“Life today is no easier than it was during the time of Brother Andre,” Father Aumont said. “Many people are faced with poverty, sickness, unstable jobs and solitude.”

Claude Poulin, founder of Maison Andre-Bessette, a home for teens recovering from drug and alcohol addiction in St-Frederic de Beauce, Quebec, said he was moved, but not surprised, by the news from the Vatican.

Inspired by Brother Andre since his first visit to the oratory as a boy, Poulin opened the home about 10 years ago. He said Brother Andre communicates five major values which he shares with the people he welcomes: work, prayer, ecology, hospitality and living humbly.

Poulin helps his parish priest lead a prayerful pilgrimage to the oratory every year. They bring more than 60 people – in 2009 more than half were newcomers – an indication that Brother Andre continues to inspire many, he said.

In the Toronto suburb of Markham, staff and students at Brother Andre Catholic High School happily acknowledged that Brother Andre’s canonization would coincide with the school’s 25th anniversary.

“We were delighted to hear that,” said Jim Niccoletti, the school’s principal. “I went over the (public address system) myself and announced to the whole school a little bit of history about his background and why we’re so proud. It’s an amazing story and we’re very proud to have the namesake as our school and in the future, we should consider calling ourselves St. Andre Catholic High School.”

Similarly, Brother Andre Catholic School in Ajax, Ontario, is planning a celebration. As one of the Durham Catholic District School Board’s newest schools, it was named for the future saint because of his dedication to the Catholic Church and its people, board chair Jim McCafferty said.