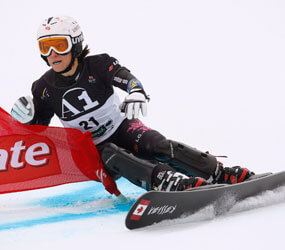 RICHMOND, British Columbia – St. Joseph the Worker parishioner Alexa Loo will have the hopes of her Richmond parish and the entire country riding with her when she goes for a snowboarding gold in the parallel giant slalom in the Olympics.

The reigning North American slalom champion and silver medalist at the World Cup in Austria in January, Loo will be racing in her second Olympics.

How does she feel going in?

“Good, really good. There’s going to be a lot of good competition,” she said.

The Olympics, toward which she has dedicated her energy for years, will be just part of what will be a momentous year in her life.

Once the Olympics are over she and her fiance Ari Goosen will attend marriage preparation courses and an engagement encounter at St. Joseph’s. On May 21 she plans to marry Goosen in the church she and her family have attended since they moved to Richmond from Vancouver when she was 2 weeks old.

“My faith plays a part in my daily life. It’s part of my upbringing. My aunt’s a Sister of St. Ann in Victoria,” she said.

“When I started dating my boyfriend the first thing I told him was, ‘I’m a Catholic, and if we get married we’ll raise the kids Catholics.’“

It’s probably that no-nonsense and dedication to the fundamentals that allowed her to take up snowboarding at the relatively old age of 15 and turn herself into an Olympic athlete.

Her journey to the 2010 Olympics has been anything but smooth. Two blown knees and bad luck have caused setbacks that a less determined spirit might have found overwhelming.

Loo failed to qualify for the 1998 Olympics and missed out on the 2002 games by one-tenth of a second. She finished a disappointing 20th in the 2006 Olympic Games when she made a mistake on her second qualifying run and looped out of the course.

Since then she has trained hard and come back stronger, as her recent World Cup performance shows.

“I live a bit of a monastic life, always traveling, living out of a suitcase. All my money is spent on snowboarding,” she said.

When she was growing up her routine was Mass on Saturday, then Sundays out on the hill skiing. She was 2 when she was first placed on skis.

She remembers the parish priest was a frequent dinner guest when she was growing up, “so the influence was always there for me. My dad was the official nonpracticing Catholic, but my mom is very devout,” she said.

Loo said that she doesn’t make a public show of her faith when she races. She doesn’t bless herself and kiss a sacred medal around her neck, as others might. “For me my faith is who I am. I can’t say I sit on the bus and say the rosary, but the night before a big race I’ll pray, ‘Please God, help me ride my best.’ ”