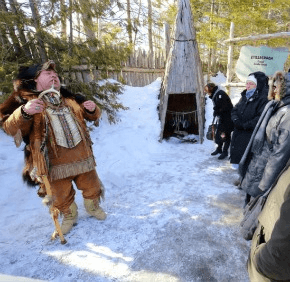 WENDAKE, Quebec – Inside the traditional Huron longhouse, faint glimmerings cast light on the attendees’ faces. Standing on a stool, Simon Perusse, dressed in his traditional costume, told of the lifestyle and values of the Huron-Wendat Nation.
The wooden structure once housed several families. On the ground, small grids with plastic fish stood above hearths and recalled the smoking that was practiced there. Relationship with nature, community life, family life: The group composed mainly of nuns and religious listened respectfully to the guide.
After all, they came to meet native peoples.
About 50 of them enlisted for this unprecedented activity organized by the Canadian Religious Conference March 10. The conference hopes to foster closer ties between Catholic religious communities and First Nations peoples. It was the first time a Canadian Religious Conference activity took place on a reserve, at the traditional Huron ONHOUA CHETEK8E site in Wendake, outside Quebec City.
Nicole O’Bomsawin, an anthropologist and member of the Abenaki tribe, was pleased with the initiative.
“Ten years ago, we were not there. But now this is another step. It pleases me to see this new commitment,” she said.
O’Bomsawin, 60, involved in dialogue initiatives between First Nations and Catholics for many years, is particularly interested in forging links between traditional native spirituality and Catholicism. This is what she did at the beginning of the traditional meal that was offered to the attendees, singing a prayer song as a blessing.
The Rev. Richard Bonetto, Presbyterian pastor and founder of the Wampum Centre, spoke of his experience of dialogue in the center he founded in 1994.
“There’s hope,” he says during the meal. “We are increasingly conscientious about First Nation heritage. And more respectful too.”
He believes that the residential schools and the Truth and Reconciliation Commission have had a sensitizing effect.
Stephanie Gravel, associate director of regional programming and leadership support, was in charge of the initiative.
“It’s really the first official meeting to talk with the natives,” she said. “It is truly an official call to action of Canada’s Truth and Reconciliation Commission, which calls for awareness and conscience raising, and mutual understanding meetings to begin the dialogue.”
In 2015, the commission detailed the treatment of aboriginal children in residential schools supported by the Canadian government but administered by religious organizations, including the Catholic Church. The commission described what happened to the children and their communities as “cultural genocide.”
Gravel said she expected the event to be more delicate. In a context where many groups demand more outspoken apologies from Pope Francis to the First Nations, and in which Catholic religious communities played an important role in the administration of residential schools, she wondered for a moment whether the Canadian Religious Conference would prefer not to venture too much into these issues.
“To avoid this, I wanted to make a festive gathering. We go to meet natives, eat native meals, discuss, pray,” she said. “It allows first steps to inspire. We did not want to delve into guilt.”
She said the Canadian Religious Conference eventually will try to organize activities in which more First Nations members will participate.
In the meantime, dozens of nuns and religious, as well as some laypeople, devoted March 10 to meeting indigenous people. Several of them already work side by side with First Nation peoples, whether in pastoral care, education or health.
Every year, Sister Renelle Lasalle, a member of the Sisters of the Sacred Hearts of Jesus and Mary, takes 40 teenagers from Granby, Quebec, to meet members of Abitibi’s Lac-Simon, Pikogan and Kitcisakik communities.
“I’ve been in Abitibi for seven years, and I learn every day. An event like today, it’s important for meeting people,” she said, noting that it took her decades to change her outlook on the First Nations. “I had no interest in them. Then I gradually changed. Today, I see how good they are.”
Of all the religious participants, only one person was of native descent. Lina Dubois works at the Har’el Bible Center in Saint-Augustin-de-Desmaures, Quebec. Although she has Abenaki roots, she said that was not necessarily what motivated her to travel to Wendake.
“Every time I come here, I feel good, as if it were my house or my roots. I wanted to know more about the native life, especially the Huron-Wendat Nation,” she explained. “It is a place where it is possible to exchange, to understand one another. The neighbor is not dangerous, he is rather rewarding. But it is not easy to let oneself be displaced and questioned by the other.”
The Canadian Religious Conference will hold a similar event at the Wabano Centre in Ottawa April 1.