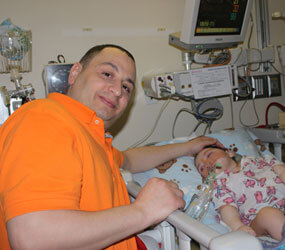 WASHINGTON – Bobby Schindler said he can see parallels between the case of a Canadian infant known as “Baby Joseph” and the situation of his late sister, Terry Schiavo, who died in 2005 13 days after a court ordered her feeding tube removed.

Joseph Maraachli, a 13 month-old Canadian boy suffering from a progressive neurodegenerative disease, is getting a second chance at treatment after being transported to a Catholic hospital in St. Louis.

The baby and his father, Moe Maraachli, were taken by private plane to St. Louis where the infant was admitted to SSM Cardinal Glennon Children’s Medical Center March 13, ending the family’s battle with a London, Ontario, hospital that sought to withdraw the breathing tube that was keeping the seriously ill boy alive.

According to court papers, a doctor treating the child had recommended the tube be removed and he be allowed to die, saying “all cranial nerve functions were absent and he has no hope for recovery.” The baby’s parents wanted doctors to give him a tracheotomy and keep him on a ventilator so they could care for him at home.

The battle with Canada may be over, but Schindler told CNS: “We still have a sick child here. He is still in need of our prayers.”

Priests for Life, which is based in New York, hired the private plane for the family and will cover the medical costs.

According to The Catholic Register in Toronto, the family’s legal team in Windsor, Ontario, lawyer Claudio Martini and the Washington-based American Center for Law and Justice helped secure the transfer of Joseph to the Missouri hospital.

Father Frank Pavone, national director of Priests for Life, accompanied the family to St. Louis. In an interview with the St. Louis Review, the archdiocesan newspaper, he said the family was feeling “delighted” and “relieved” to be there with their son.

The child’s mother, Sana Nadar, who is Catholic, and Moe Maraachli, who is Muslim, both believe in miracles, according to Father Pavone.

“They believe in a God who answers prayers, but they also believe God is the one who is in charge, and they are ready to accept his will for however long this child is given to be with them,” Father Pavone told the Review.

A Feb. 18 ruling by the Ontario Superior Court ordered the family to consent to the removal of the breathing tube Feb. 21. The court confirmed the recommendations of the hospital’s doctors and the Consent and Capacity Board of Ontario. But Joseph’s family defied the legal order and sought the transfer to another hospital and a second opinion.

Martini said after three days of talks with the Ontario hospital, the transfer was arranged. He said Joseph was “resting well” at the St. Louis hospital. “He is on a breathing tube and his treatment is status quo.”

The St. Louis hospital planned its own evaluation of the baby, and Dr. Robert Wilmott, chief of pediatrics at Cardinal Glennon, said in a statement that a tracheotomy would be performed within a week of his arrival. A tracheotomy is a surgical procedure that creates a safe and stable way to use a mechanical ventilator through an incision in the neck.

Other U.S. hospitals had turned down the family’s request for a transfer, noted the London Health Sciences Center, which defended its decision in a statement posted online: “Despite the strongest possible medical advice to the contrary from medical experts in Canada, the United States and Europe, the parents of Baby Joseph Maraachli have accepted an offer to transfer him by air to the faith-based Cardinal Glennon Children’s Hospital in St. Louis, Missouri.”

The hospital also said it was “targeted by well-organized social media feeds and directly via e-mail with personal threats, threats to their families, innuendoes and falsehoods.”

As for the St. Louis hospital, it “has agreed to provide the medical evaluation and treatment requested by his parents,” it said in a statement.

Father Pavone told the Review that Cardinal Glennon “has been just outstanding in every way … If there is a chance this boy can live, we have to explore every option.”

Schindler, who is executive director of Terri Schiavo Life & Hope Network, told CNS he was “delighted” for the family and their baby.

He said he met the Maraachli family at the beginning of March and held a news conference to raise awareness of their situation.

According to him, the Canadian hospital told Moe Maraachli if he attended the conference they would stop all negotiations with the family.

“They obviously were very nervous we were involved,” said Schindler.

Contributing to this story was Jennifer Brinker in St. Louis and Sheila Dabu Nonato in Toronto.