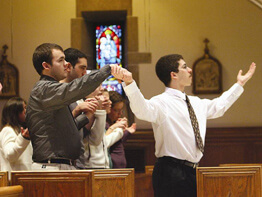 Loyola College in Maryland senior Matt Greer was relieved when he learned the school scheduled a special 4 p.m. Mass on Super Bowl Sunday because he would probably have had to skip his weekly spiritual ritual to watch the big game with his buddies.

“I usually attend the 9 p.m. Mass,” said the 21-year-old student from Westchester, N.Y. “That would have been in the middle of the Super Bowl. I don’t like to skip Mass, but I really didn’t want to miss the Super Bowl.”

By moving its regularly scheduled 6 p.m. Mass to 4 p.m. on Super Bowl Sunday, the Baltimore campus chapel was filled with more than 200 church-goers, most appearing to be under the age of 23.

The accommodation is one of many tactics college officials are using to encourage more students to attend Mass.

“For years we said we were not going to pay attention to American culture and we didn’t change our schedule for the Super Bowl, and we’d have 32 people show up,” said George Miller, associate director of campus ministry and the choir director. “Now, we’ve learned that if we are a little more flexible – and schedule a Mass so the students have time to eat afterward before getting to their game parties – we see a whole lot more show up.”

In a time when Catholic college campus chapels are losing population, Loyola has responded by establishing a Mass in the freshmen dorms, encouraging student involvement in the choir, adopting more contemporary music at certain Masses and inviting input in writing the weekly homily, Mr. Miller said.

“We’ve had to be innovative in our approach to attract them. No, we don’t pay them, yet!” he said.

With a full-time student population of 3,200 and about 2,800 who live on campus, approximately 700 attend Mass on the school’s grounds each week, said Father Brian F. Linnane, S.J., president of the college.

“That is about a third of our Catholics attending Mass,” Father Linnane said. “We could be doing better than that, but it also doesn’t speak too badly for us, considering that in our culture, students can be hostile to religious commitment.”

During the 4 p.m. Super Bowl Sunday Mass, most students wore blue jeans, the 30-plus student member choir was accompanied by a drummer, guitarist, pianist and organist, students delivered the readings and served as extraordinary ministers of holy Communion, and the service ran with impeccable efficiency.

“There’s no pressure to get dressed up for church and I really like that,” said Stephanie Dunn, a 19-year-old freshman from Media, Pa. “It’s so much more comfortable and relaxed. I feel like I can drop all of those kinds of pretenses and pay attention to what’s going on in Mass.”

When Mr. Greer was a freshman, he attended Mass with scores of his classmates, but he’s noticed that over the years fewer of them continued to attend church on a consistent basis.

“Generally we see a lot of freshmen at our Masses in September,” Mr. Miller said. “When they realize no one is watching them, the numbers drop off. We do see an increase during exams because students need to find Jesus during exams.”

Several years ago Father Joseph Rossi, S.J., began a weekly service in a freshmen dormitory and at first only a handful of students attended, Father Linnane said. “That is a very popular Mass now, and it’s not only attended by just freshman any longer. You can find juniors and seniors at that Mass, and it’s not unusual to see them show up in their pajamas.”

Of the three traditional Masses at Loyola’s Alumni Memorial Chapel each Sunday (11 a.m., 6 and 9 p.m.), the 6 p.m. Mass is the most popular among the students, drawing as many as 400, he said.

The full student choir performs a variety of styles of music – from contemporary to Spanish-influenced compositions – at the 6 p.m. Mass, Mr. Miller said.

The college also urges students to be actively involved in the church to keep the services relevant and to reflect the world in which these young people live, he said.

Even though the homilies are universal in the treatment of the Scriptures, the subjects tend to be related to specific issues that affect college students, and often it’s distinctively a matter happening on campus, Mr. Miller said.

“It’s not uncommon for (a priest) to sit down with a small group of students to look at the Scripture and reflect on how it pertains to them when he’s preparing his homily,” he said. “You can see their faces light up when they hear their own ideas and thoughts brought up in the homily.”