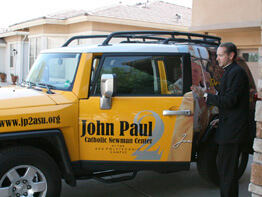 MESA, Ariz. – A college campus is accustomed to high-speed objects flying across its grounds: students bicycling down the mall, professors hurrying to their next class, a sport utility vehicle adorned with pictures of Pope John Paul II disseminating campus ministry information.
OK, so only students at Arizona State University’s Polytechnic campus in Mesa will experience that last example.
That’s because Father Michael Goodyear, a Legionaries of Christ priest who is chaplain of Polytechnic’s John Paul II Newman Center, recently outfitted his SUV with pictures and messages of his office’s namesake.
“When Bishop (Thomas J.) Olmsted (of Phoenix) asked me to come to the Polytechnic and initiate campus ministry, there was no history of anything there,” Father Goodyear said.
“We didn’t have an office space, no Newman Center. There was no list of Catholic students,” he said. “We had nothing.”
Many of those challenges remain for Father Goodyear, who is entering his second year as chaplain at Arizona State University’s east campus.
He still has no office on campus, but he did manage to procure one on wheels.
“We thought, ‘What can we do to get the word out that we’re there and create a buzz on campus and have a space?’” he said. “What’s in our grasp is a vehicle.”
He drives his “popemobile” on campus and it serves as an advertisement for the Newman Center and as a mobile office.
“I’m trying to be as visible as possible,” the chaplain said.
Founding a Newman Center or a parish in any circumstance is difficult, Father Goodyear said, but the nature of Polytechnic presents its own challenges.
Few students live on the sprawling Mesa campus. Most are commuters who attend classes and leave. Fostering community on campus has been difficult.
“Getting started is not easy. At the beginning, it’s going to be slow, so I’ve tried to encourage the students to work with it,” Father Goodyear told The Catholic Sun, newspaper of the Phoenix Diocese.
His popemobile gives the students something to rally around, he said.
“We want to take it out (to go) hiking and, in the tradition of John Paul II, kayaking, as he would so often do with his students. We even have visions of flipping the kayak upside down and celebrating Mass on it like he did,” Father Goodyear said.
But his popemobile reaches beyond the campus, too.
“It’s evangelization 24/7,” Father Goodyear said.
He has gotten positive notice from drivers on the nearby freeway loop and in the parking lot at a Kinko’s copy center. Catholics come up to him and share how much the late pope meant to them.
The car also features oft-repeated messages of Pope John Paul. “Do not be afraid” and “God is with you” adorn the Toyota FJ Cruiser’s doors.
“It might just be a reminder that somebody needs on the freeway or in the streets or parked at the grocery store,” Father Goodyear said.
He has worked with students for 13 years and has found great things happen when he challenges students “concretely into taking the church and her mission into their hands.”
Thankfully, the chaplain has found a few students ready to take on that responsibility.
Freshman Anthony Mancuso said he got involved in the Newman Center because of the community it helps build.
“There are so many ups and downs associated with college that it is comforting to know that there is a community and a God always there to support you no matter what the situation is,” he said.