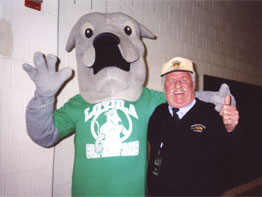 Students might not know who Thaddeus Stanislaus Blusiewicz Jr. is, but everyone knows Ted.

Mr. Blusiewicz drives one of the shuttle buses at Loyola College in Maryland, Baltimore, a job he’s enjoyed for the last 10 years.

“I’m very close to the students,” he said in his characteristic booming voice, as he greets students who board his bus.

He begins his relationship with the freshmen on move-in day, where he gives a standard speech about how they’ve been given a wonderful chance to succeed and reminds them that “you may have cruised through high school, but here they have academics down to a science.”

He adds, “I reassure the moms and dads I’ll take care of their little dumplings.” He also takes pictures of freshmen and sophomores, which he gives them when they’re seniors.

He has a senior speech, too, in which he tells them, “The past four years should have been the most informative of your life. Now go out and make megabucks so you can pay for Ted’s social security, because I don’t know who’s paying for yours!” He follows that speech with a big laugh.

He enjoys watching the students grow from excited, starry-eyed freshmen to accomplished seniors. He presents them with homemade chocolate chip cookies in the fall and always has cough drops at the ready throughout the winter. Spring finds him adorning the bus with daffodils.

“I’ve been given the privilege of watching them grow up,” he said. “I go to all the graduations – I cry more than the parents do.”

“I love riding with Ted,” said Larry O’Brien, a student from Rockville and a parishioner of St. John Neumann in Montgomery County. “He’s always talking. If I have a good day, he makes it better, and if I’m having a bad day, he makes it good.”

Mr. Blusiewicz also has another role at Loyola – he gives lectures in environmental science and economic classes.

A waterman in the summers, Mr. Blusiewicz knows well the fish, crabs and pollution problems in the Chesapeake Bay, and he speaks knowledgeably to the science classes.

His talk to the economics class is born of a harsher experience; Mr. Blusiewicz worked for 33 years at Bethlehem Steel, and when that company went bankrupt, he lost his pension. He uses 100 slides to explain how steel was made inside the Dundalk mill and what it was used for throughout the world, and then he details the impact the bankruptcy had on his wife and three sons.

In fact, it was the ability to provide a college education for his sons that led him to take the job at Loyola.

“But the determining factor was that after 33 years at Bethlehem Steel, I didn’t want a job for 52 weeks a year,” he said. “This was a nine-month position – I’m a commercial crabber.” Now 60, he’s also appreciated the time with his wife and sons the job has afforded him.

Each week, Mr. Blusiewicz, a parishioner of St. Michael the Archangel in Overlea, transports about 900 students, faculty and staff members throughout the Loyola campus and to satellite parking areas. As he passes a young woman standing alone, he pauses and calls out to her to make sure she has a ride.

He also likes to run contests on the bus, asking students geography trivia questions or daring them to name the song and artist from the 1960s and 1970s music on the radio. The prize is a giant Hershey bar.

“If I can brighten up anyone’s day, it makes my day,” he said.