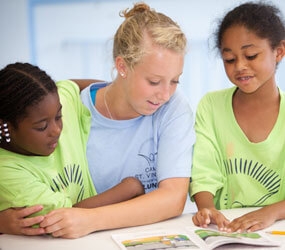 For Tammie Maynard of Booth House, a homeless shelter in Mount Vernon, Camp St. Vincent has served two purposes toward her and her daughter’s well-being.

Maynard herself has had the security of knowing her daughter, Tresjour, has been safe during the day as the mother embarked on a job hunt, which ended in mid-July, the day before her daughter’s sixth birthday.

The mother had been out of work for “two years, two months, and six days,” she said, before landing a temporary position she hopes will become permanent at the Department of Finance in Baltimore.

“I’m really proud of this little girl,” said Maynard about her daughter, who is attending Camp St. Vincent for the first time. “She’s a sponge. She’s grabbing everything.”

Calling her daughter a “leader,” the mother explained that Tresjour performed extremely well this past year in kindergarten at Walter P. Carter Elementary School, where Maynard offered time volunteering. She is now attempting to get her daughter into one of Baltimore’s charter schools in an effort to “help her advance.”

“She’s theatrical, very vocal,” said Maynard. “She wants to be president when she grows up.”

Throughout daycare and preschool in years past, the mother said “a lot of teachers liked (Tresjour) because she soaked up so much.”

Tresjour has been one of 150 children, all homeless, at Camp St. Vincent this summer. Each week they’re engaged in reading, math, sports activities and arts, the latter of which are being offered for the second year in a row through a partnership with the Creative Alliance.

Vena Carter, camp director, said that the children take field trips each Friday of the camp; their final trip took them to the National Zoo.

“The majority of campers come every day and are eager and willing to be here,” said Carter.

Tresjour displays that enthusiasm, which is evident to a visitor to Camp St. Vincent, where all campers are engaged in their activities. One group could be found sitting under tables draped in blankets, creating a fort where they gave their full attention to a book their counselor was reading with them.

Carter said she has “seen (in campers) more passion for wanting to do math,” and noted that “their social skills improve. They increase from pre-K to kindergarten especially.”

“The whole group is my friends,” the little girl said.

Tresjour said her favorite things to do at camp are reading and math. Sitting on her mother’s lap, she ran through a list of 22 books she had read since camp began in late June.

Tresjour said “Curious George and the Aquarium” was her favorite book, but the camper also liked reading about dinosaurs and giggled when she talked about “The Furry-Legged Teapot,” a book about a raccoon that turns into a teapot.

Each Wednesday at camp, the children get up off their feet in a dance class where they learn hip-hop moves.

“Tresjour was in the front line every time at school with dance,” said Maynard, happy to report that “she’s still into it here.”

Of course, Tresjour has also enjoyed playing at the playground and in the pool, the little girl said.

“For eight weeks, (campers) have the opportunity to swim every day,” said Carter, who explained water safety instructors teach children to swim at different levels: tadpoles, guppies, dolphins and sharks.

Additionally, the director explained campers are involved in a social/emotional curriculum three days a week, where they discuss issues such as community, family, problem solving, and courage and hope. “It helps them to cope with things they’re not able to address during the regular school year,” she said.

Maynard said Tresjour was asked at camp one day what a wish is; the mother found her little girl’s response inspiring: “I think a wish is asking God for something you really want.”