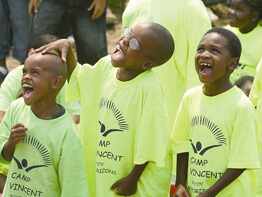 Asked what he wants to be when he grows up, 11-year-old Diallo Bratcher didn’t pause for a moment before he replied with the most serious expression he could produce.
“A lawyer,” he answered.
Why? “Because I talk a lot,” Diallo said, and this time his almost ever-present, infectious grin returned.
Diallo, his 10-year-old brother and 8-year-old sister are, along with 141 other youngsters, part of Camp St. Vincent, founded 100 years ago to give poor, inner-city children a three-month summer opportunity to enjoy fresh air, nature and themselves.
As the St. Vincent de Paul of Baltimore-operated camp celebrated its centennial birthday party outside Baltimore’s Carroll Park field house Aug. 15, the organization’s executive director, John Schiavone, paused to reflect on the irony of the camp now being made up of a majority of homeless children. Sixty percent of the children, who range in ages from five to 11, are either homeless or live in transitional homes, like Diallo and his siblings.
“Beginning last April the camp was homeless too,” Mr. Schiavone explained.
Before then, as of 1994 when it moved from its home in Annapolis, Camp St. Vincent was located during the summer at the Monsignor O’Dwyer Youth Retreat House in the picturesque countryside of Sparks.
But, as the retreat house began to take on a new direction, the camp’s summer presence there was “no longer a good fit,” as Mr. Schiavone put it.
It happened at a time when Camp St. Vincent had decided to make a significant outreach to homeless children who were underserved in the city and Baltimore County.
“Now ‘we’ were homeless and we had to find another venue,” Mr. Schiavone said.
The Society turned to Baltimore City, with which it already had some good partnership relationships, and asked for help. The Department of Recreation and Parks offered part of Carroll Park with its playing fields and air-conditioned field house, in which the youngsters could get their academic instruction and arts and crafts lessons.
There was no swimming pool, though, as there had been at the retreat house, but the youngsters now make field trips to Druid Hill Park’s public pool, as well as to the Baltimore Zoo and Aquarium.
“It’s worked out extremely well,” Mr. Schiavone said, “and we’re very grateful to the city for its partnership in something we both believe in.”
When Camp St. Vincent began in Catonsville 100 years ago, its mission was to remove poor, inner-city children “from crowded conditions and unhealthy environments” and give them a summer of fun and fresh-air. Much of the emphasis then was on the children’s health, and doctors treated them for a variety of conditions that are no longer an issue today and followed up their care after camp was over.
Today, apart from the always important fun, nature and fresh air aspects of Camp St. Vincent, the emphasis is on boosting the children’s learning level in the summer so that, as camp director, Shannon Hayes explained, “it gives them a cushion when they go back to school.”
An eighth grade history teacher, Mr. Hayes said it’s particularly important to help the homeless children academically, because the nature of their precarious home environments and experiences makes it more difficult for them to learn.
“There’s a learning loss with homeless children, and they’re a lot more vulnerable in many ways,” the director said.
Camp St. Vincent maintains a paid staff of 16, many of them schoolteachers, but also counts on some 30 volunteers, most of them from Catholic schools like Mercy, The Catholic High School of Baltimore , and Maryvale Preparatory Academy, Brooklandville. Some are from public schools, who find their way to the camp through their parishes.
“We’re really pleased with the volunteer component,” Mr. Schiavone said. “It allows the kids to get much more personal attention. They need nurturing attention and, with the help of the volunteers, we can give them this kind of attention in the summer months.”
That young Diallo wants to become a lawyer, when not too long ago the homeless child had no aspirations at all, shows what a difference Camp St. Vincent can make in young lives, Mr. Hayes said.
St. Vincent de Paul, the camp staff and the children are happy with the new arrangement at Carroll Park but Mr. Schiavone hopes that sometime in the future a permanent, more stable home will be found for the camp.
On hand with Mr. Schiavone to celebrate Camp St. Vincent’s 100th birthday party at Carroll Park were Janie McCullough, Baltimore City’s assistant deputy mayor of Community & Housing Development and Portia Harris, associate director of the city’s Department of Parks and Recreation.