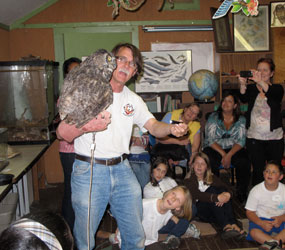 Lucas Wunderer ran around Camp Puh’Tuk’s Thunderbird Lodge May 15 like he didn’t have a care in the world.

“He’s acting like himself,” said his mother, Jeanne. “I know he’s an active kid, but he holds a lot back with me when I’m grieving and emotional. I’m very happy and grateful that he’s acting like a kid. They’ve allowed him to be a kid here.”

Earlier this year, Jeanne’s mother died quickly after a cancer diagnosis. It was not only emotional for Jeanne, but for Lucas as well. Jeanne adopted Lucas as an infant seven years ago from Guatemala and Jeanne’s mother was instrumental in raising him.

Jeanne wanted a place where Lucas could learn skills to adjust to his life without his grandmother. She found out about Camp Me Too, a two-day overnight camp at Camp Puh’Tuk in Monkton May 14-15. Founded this year by the Stella Maris Center for Grief and Loss, Camp Me Too was for young people ages 8 to 15 who are dealing with the deaths of loved ones.

“They’re all in the same boat,” Jeanne said.

Each camper was paired off with a buddy counselor who accompanied the young person on a journey of re-birth.

“Buddy” Manuel Ruiz was asked by his friend, Heidi Schreiber-Pan , a bereveament counselor who served as one of the camp’s leaders, to take part in Camp Me Too. He said working with children in the grieving period presents challenges.

“Everybody who has a loss has cycles or some ups and downs,” Ruiz said. “With kids, those ups and downs are shorter. That makes it difficult.”

Ruiz said he was inspired by Lucas, who drew pictures of Ruiz during one workshop.

“It was touching,” Ruiz said.

Woody Yelton, a father of two, could not stop smiling as he watched his son Noah, 8, come out of his shell. Yelton’s wife, Nancy, died last year after a 20-month struggle with cancer. The family’s coffee table is covered in glass. Underneath that glass are pictures of the family with Nancy.

“We talk about her every single day,” Woody said.

Still, Woody is like many parents trying to deal with his own loss as well as his child’s.

“I don’t know exactly what to say to him at home,” Woody said. “I try to pick his brain and talk about his mom all the time. He’s not very open with it. I wanted him to be around kids in similar situations so he wasn’t growing thinking he was the only kid that something like this happens to.”

In a group session with parents and campers, Schreiber-Pan explained “the four T’s” for the healing process: time, tears, talking and touch.

“You have the most beautiful children,” Horan said. “They were amazing. They bonded. This is a sign to you. They can live fully, freely and abundantly, even with this loss. It’s believing in them, giving them space, support, listening and reminding them … to look inward, grieve and feel.”

As camp neared its conclusion, campers released balloons with notes for their lost loved ones and released butterflies as well. They all smiled and laughed.

As they parted, each child told fellow campers and families about how they had grown.

Lucas Wunderer walked in front of the crowd with Ruiz, his buddy, and talked about adjusting to life without his grandmother.