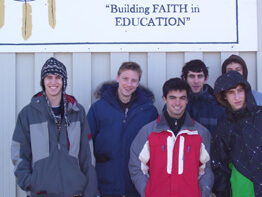 In the below freezing weather Jan. 27 to Feb. 3, six students and two chaperones from Calvert Hall College High School, Baltimore, traveled to the Blackfeet Indian reservation in Montana to spend a week teaching children and learning the culture at the Christian Brothers school, San Miguel.

While the snow-covered mountains and flat fields that seemed to go on for miles were an amazing sight to see, the reservation itself was not as pleasing to the eye. Signs of poverty were evident on the reservation, which was littered with trash while packs of dogs ran wild. According to Marc Parisi, campus minister for Calvert Hall, some 10,000 people live on the reservation – many of them in run-down trailers with car tires lying on the roof.

The five seniors and one junior from Calvert Hall were on a mission to learn about the Blackfeet Indians, help the students of San Miguel and experience something outside of Maryland and their comfort zone.

“How many opportunities do you have to go to Montana and work on an Indian reservation?” said senior Pat Lambdin, who said he has always been interested in Native American history and culture.

The small group lodged in the school gymnasium on foam mattresses and sleeping bags while heavy winds swirled outside. The men woke at five of seven each morning to make breakfast and lunch and to prepare for the day. When the students arrived at 8 a.m. the young men assisted them with their studies, particularly math. Most of the children do not leave school until 4:30 p.m. so the Calvert Hall students would play basketball, music or do art projects with them.

After dinner the six students listened to presentations on the economics, spirituality and life on the reservation.

“I now have a better understanding of their culture,” said Mr. Lambdin, 18.

Bobby Herster-Dudley, 18, said his faith helped him serve as a role model for the children in the San Miguel School. Feeling like a big brother, the teen encouraged the children to pursue a higher education. He told them of his own experiences and challenged them to lead an alcohol and drug free existence.

“I learned how good we have it here, some children don’t even have running water,” said the high school senior. “I think we learned a lot about ourselves, too.”

Senior Nick Ibello found it difficult to watch the children come to school and then not want to go home because they were being abused or neglected.

“What struck me was the challenge they had in dealing with their poverty,” said Mr. Ibello. “I learned to strive to be more open-minded and not make stereotypes just by looking at someone.”

Mr. Parisi said that as a teacher, it is “neat to see (the students) still learning even when they aren’t the students.”

They learned about themselves as young men of faith,” he said.

Father Martin Nocchi, a chaperone on the trip and director of the Monsignor O’Dwyer Retreat House in Sparks, said he thinks the young men learned that the American way is not the only way. He said this experience changes a person’s life and they will start to look at people a little differently now.

“My favorite part was just working with these six guys and helping make the connection between faith and what we say and what we do,” said Father Nocchi. “It was good for them to be put in a place where we were the minority.”

Mr. Ibello said he wanted to be a “presence” for the children. In the beginning of the week the students were stand-offish toward the eight visitors but before they left they had started to open up and became very attached to the men that had been helping them.

“I thought I was there for a reason. We were all guided by a spirit the whole time,” said Mr. Lambdin. “It was a blessing we were able to go.”