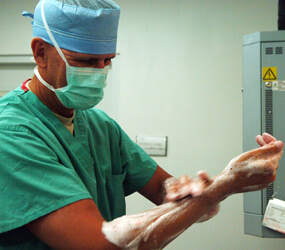 Whenever an American serviceman suffered a major injury in Iraq, there was a very strong probability he would be treated by Dr. Wilmer Jones.

For nearly five months in 2007, at a time when Americans were battling an unyielding insurgency, Dr. Jones was the only vascular surgeon in the war-torn nation.

“(Insurgents) would stand outside our fence and launch as many mortars as they could,” remembered Dr. Jones, a 1979 graduate of Calvert Hall College High School in Towson and a 48-year-old lieutenant colonel in the U.S. Air Force.

“We would get mortars five to seven times a day,” he said. “Our staff would lie on the floor, but as a surgeon, I couldn’t put on my helmet and scrub. It was exactly like a M*A*S*H scene.”

In a telephone interview from Texas, where he is he currently chief of vascular surgery at the San Antonio Military Medical Consortium, Dr. Jones reflected on what it’s like to serve in the heat of battle.

He expressed hope for the people of Iraq and recounted how his Catholic faith has sustained him.

During his tour of duty, Dr. Jones dealt with 400 cases, 300 of which involved abdominal trauma and the remainder encompassing artery repairs. He was assisted by six other surgeons as the injured and dying were flown by helicopter to his hospital, located on Joint Base Balad, approximately 45 miles northwest of Baghdad.

Seeing bloodied young men ripped apart by bullets or roadside bombs leaves a deep impact and served as a constant reminder of their bravery and commitment, Dr. Jones said.

“If that doesn’t change your life, nothing will,” said Dr. Jones, who attended St. Mary of the Assumption School in Govans and Immaculate Heart of Mary School in Baynesville.

“It really breaks your heart to see a 19-year-old serviceman with his whole life ahead of him blown to smithereens,” said the father of two sons and a daughter. “It’s terrible.”

During his second tour of duty in Iraq, which lasted from January to May of this year, Dr. Jones faced a much less active theater. Thanks to the surge in U.S. troops, he said, there were far fewer causalities. American doctors instead performed surgeries on Iraqi citizens who would not otherwise have access to lifesaving treatment.

Dr. Jones and his team made history March 30 when they treated a 42-year-old Iraqi mother of nine who was suffering a large aneurysm of the carotid artery. They performed a transposition of the internal carotid artery. The procedure attached the carotid artery that provides blood to her face to the artery going to her brain. It was only the ninth medically documented instance that the complicated procedure has been performed.

“She was in the hospital for two days and we followed up with her for four months,” said Dr. Jones, noting that Iraqis often prepare special meals for American doctors as a show of their appreciation.

Reaching out to Iraqis builds trust and goodwill, Dr. Jones said. People in need of medical attention regularly stood at the hospital gate for eight hours at a time, he said, hoping for a chance to be treated by an American doctor.

“The Iraqis are beautiful people who want the same things we want – a good family life and safety for their kids,” Dr. Jones said. “When we treat them, they take their good news to their fellow countrymen and let others know we’re doing great things.”

Dr. Jones said his Catholic faith and camaraderie with his staff are constant supports, as is his wife, Kathie. He is especially close with Father John B. Ward, pastor of Our Lady of Hope in Dundalk, relying on him for spiritual guidance.

Awaiting his next assignment, Dr. Jones expects that he will probably next serve in Afghanistan. He’s ready.

“I’ll go wherever they need me,” he said. “I have a gift to help people. If that means going in harm’s way to save a life, that’s what I’ll do.”