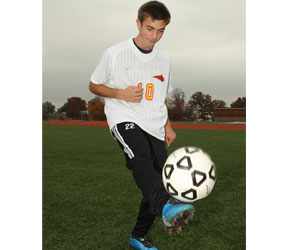 When Pete Caringi was born, he was already a member of the Calvert Hall family. His father, of the same name, led the University of Baltimore to an NCAA Division II soccer title and is in his 19th season as the head coach at UMBC. He began his soccer sojourn as a prep All-American for Calvert Hall in the early 1970s.

The son eventually dreamed of carving out his own niche for the Cardinals. He has achieved that goal and become one of the biggest ambassadors for the Towson institution.

“In my 18 years of coaching at all levels in the Calvert Hall soccer program,” said Andy Moore, the Cardinals’ varsity coach, “I have never had a player who loved the school and wanted to win for Calvert Hall as much as Pete.”

Moore has watched the forward mature physically and mentally over the last four years. When he arrived at the school as a freshman, Pete was barely above 5-feet tall. He has since grown nearly a foot.

Moore said that Caringi was “always a crafty player with great skill and finishing ability.”

Pete said that heading the ball was his forte for years and “now I’m winning every ball.”

Caringi finished the regular season with 12 goals and four assists. A parishioner of St. Joseph, Fullerton, he has eyes set on a Maryland Interscholastic Athletic Association A Conference championship.

“That was my goal since freshman year,” Pete said.

Calvert Hall is to host Mount St. Joseph in a playoff game Nov. 5. It is the first night contest ever at Paul Angelo Russo Stadium. The facility does not have lights, but Calvert Hall is renting 12 sets of portable lights for the game.

Caringi carries a 3.4 grade point average, balancing academics with his soccer demands, which also include playing for the Baltimore Bays.

“It’s very hard,” he said. “There’s like no time in the day. You’ve got realize everything takes hard work, but it all pays off in the end.”

Moore said the player has a unique determination.

“That type of mentality is what makes champions,” Moore said, “and whatever happens with our team in the playoffs, I would have to say that Pete Caringi is a champion.”