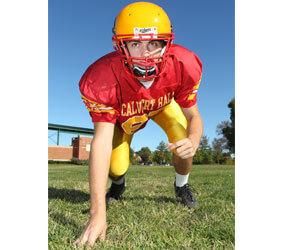 At every chance he gets, Calvert Hall’s head football coach tells his players to “keep chopping wood.” Perhaps no one has taken Donald Davis’s call to consistency more seriously than Andrew Mills, a 17-year-old senior defensive end.

Mills has been an ever-present member of Calvert Hall’s A Conference leading team – shining on the field with his quickness and off the field with a perfect GPA.

“You have to put your whole self into everything you do,” said Mills, a parishioner of Sacred Heart in Glyndon. “I try to do that academically and on the field. You just have to go out there and keep plugging.”

“He’s not a rah-rah kid,” Davis said. “He’s a lead-by-example kid. He’s unselfish, he works hard and does things the right way.”

Mills, who also plays lacrosse for Calvert Hall, has taken four Advanced Placement courses and exams, receiving a 5, the highest score, on all four. He is currently taking four more AP courses and is enrolled in an independent-study linear algebra class through an online program with The Johns Hopkins University.

Throughout this school year, Mills will work on a senior independent project in Calvert Hall’s McMullen Scholars Program – examining the feasibility of building a multi-span suspension bridge over the Strait of Gibraltar.

“Just diving headfirst into that sort of thing is overwhelming,” said Mills, president of the National Honor Society and a member of the Italian Club, “but once you start breaking things down, it gets more manageable. Trying to figure out the cost of something like that is a real stretch.”

Mills regularly volunteers at a Reisterstown nursing home, visiting residents and helping with activities. He said his Catholic faith is important to him, especially as he prepares to graduate.

“Faith is a big part of who I am,” said Mills, whose first choice for college is Princeton University, where he hopes to study mathematics, science or engineering. “I have to keep that part of my life consistent and remember who I am when I go off into the world.”

Before he leaves Calvert Hall, Mills dreams of helping his team bring home its first championship since the early 1980s. He’s optimistic.

“Any time you’re going undefeated, you’ve got to be excited,” he said.