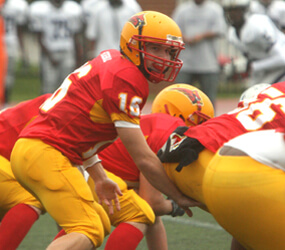 Calvert Hall football players heard the disparaging descriptions of their team heading into the season.

They were going to be undersized and a glorified J.V. team, full of inexperienced players who stood no chance of competing in the Maryland Interscholastic Athletic Association’s hyper-competitive A Conference.

Teams like Gilman, McDonogh, Mount St. Joseph and Loyola Blakefield were supposed to steamroll them, but the Cardinals instead followed the motto of their head coach, Donald Davis.

Although the team did not knock down all of the trees in the football forest this season, Calvert Hall certainly altered perceptions, thanks to its 7-4 record after a Nov. 14 victory over St. Frances Academy.

Fans are now speculating the Cardinals have a chance at ending a seven-game losing streak to Loyola in the annual Turkey Bowl Nov. 26. Kickoff at M&T Bank Stadium is 10 a.m.

“People are hearing things,” quarterback Pat Fitzgerald said. “All of the alumni want us to get the win this year. I feel like we were the talk of the league this year.”

Not everything started out rosy, however, as the Cardinals lost their first two games, emboldening doubters.

The team has gone 2-2 against MIAA A Conference opponents, beating Mount St. Joseph and Gilman, then ranked No. 2 by The Sun. The Cardinals had a chance to take the conference lead into the Turkey Bowl, but lost 7-0 to McDonogh Oct. 31.

The Turkey Bowl, which dates to the early 1920s, is arguably Baltimore’s biggest high school football game. Only the City-Poly matchup rivals its pomp and circumstance.

The game is part of Davis’ DNA. A 1996 graduate of Calvert Hall, he’s now in his third year of rebuilding the program, having never won the Turkey Bowl as a player or coach.

Is Davis going to deliver a major motivational speech beforehand?

Players that were on last year’s team are champing at the bit to face off with Loyola once again.

“It’s all that’s on my mind and all the other players’ minds,” lineman Garrett Roden said. “We can barely sleep. The anticipation leading up to it is crazy.”

Roden’s father and uncles attended Calvert Hall at a time when the Cardinals were usually victorious on Thanksgiving Day.

“What I had in mind was that we’re going to turn it around,” Roden said of his teammates. “I think this is going to be the year we can turn it around.”

Fitzgerald followed his father and grandfather in attending Calvert Hall. His first varsity action came in the 2007 Turkey Bowl, as he was called up from the J.V. team and entered a 33-10 blowout.

“It was actually unreal,” Fitzgerald said. “I couldn’t believe I was in the game. A couple of the older guys said in the huddle, ‘Hey, you need to get louder in the count.’”

Fitzgerald’s nerves subsided and he threw for more than 100 yards in the defeat.

A win can cement a legacy for Fitzgerald and other seniors. Davis wants his players to savor every moment of playing at the home of the Baltimore Ravens.

“For them, it’s a lifetime memory,” Davis said, of a setting that will see the Ravens play the Super Bowl champion Pittsburgh Steelers Nov. 29. “Jonathan Ogden played on this field. Ray Lewis is going to play on that field in three days. That’s a special, special thing for those kids.”