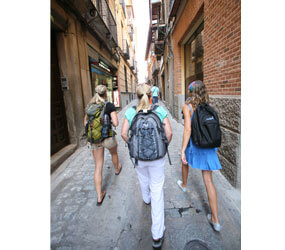 TOLEDO, Spain – World Youth Day pilgrims who wanted to dip a toe in Spain’s rich and deep Christian history discovered the Cathedral of St. Mary of Toledo was not a bad place to start.

“I am a homebody who rarely travels, but when I saw the cathedral I was utterly amazed not only at the Spanish history but our own history – a glimpse at where we come from and how important our history is,” said Gino Galley, 24, a seminarian in the Diocese of San Bernardino, Calif.

He marveled at an enormous gold monstrance and the many murals, including a heavenly scene by artist Luca Giordano, seen overhead in the sacristy. Of special interest was a collection of the Toledo-born El Greco’s early religious paintings not normally open to the public.

Many artworks were made visible to the public in time for World Youth Day, including those at the13th-century Gothic church that some consider the Gothic masterpiece church in all of Spain.

“The art! The magnificent richness, mystery helped me to understand my faith in a new way,” said Galle. “There was so much to absorb.”

In towns like Toledo, Avila and Segovia, all within a short bus ride from Madrid, groups of pilgrims trekked through medieval streets and summer temperatures to see the churches, monasteries and, cobblestone streets; some toured a historic synagogue.

“You imagine yourself back in the day they made all that,” said Lyzzeth Mandoza, 22, who works in public relations for an immigrant advocacy agency in Los Angeles and who traveled with Blessed John XXIII Parish in Rialto, Calif.

“Every building, every fountain, home and church is so detailed. To see the artists’ different interpretations leaves you speechless and boosts your Jesus points,” Mandoza said with a laugh. She also enjoyed talking to the Toledo shopkeepers, who correctly guessed she was of Mexican origin.

Under the leadership of Resurrectionist Father Timothy Keppel, the 35 Californians from four parishes in San Bernardino arrived Aug. 13 in Toledo’s historic walled city by first walking over the San Martin Bridge. As part of a half-day tour, they started the excursion with a Mass at San Nicolas Church. They were set to visit other historic cities such as Avila before Pope Benedict XVI arrives in Madrid Aug. 18 for World Youth Day.

Father Keppel said this was his third time serving as a spiritual director to a World Youth Day delegation. He asked the young people to raise at least half the funds needed for the trip, with their families responsible for the difference. He also required them to do research, reports and spiritual preparations for World Youth Day.

The priest and two other members of his congregation will also staff a booth all week at the World Youth Day vocations expo situated at Madrid’s Jardines del Buen Retiro.

“I hope the youth see the spiritual and cultural roots of our Catholic faith that are in Spain,” Father Keppel said, pointing out Moorish influences and other historical tidbits as he made his way under Toledo’s blazing afternoon sun. All around, groups of French, Italian, Polish and American youth climbed up and down the hilly backstreets of Toledo, exploring churches, sampling ice cream and catching a siesta in the central plaza.

After hitting the central points of interest, Father Keppel gave his pilgrims a few hours to wander Toledo before meeting again back at the bridge. Looking at his map, the priest decided to take a smaller group of the teens and a young priest in the group on an impromptu tour of the 14th-century Synagogue of El Transito, now a museum.

Like many of the museums and points of interest, the synagogue gave free entrance to World Youth Day pilgrims.