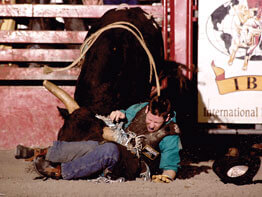 Staying astride an up-to-2,000-pound bucking, kicking, twisting bull has been described by some as the “the most dangerous eight seconds in sports.”

No one has to explain this to 25-year-old Michael Herman.

The rookie bull rider from Our Lady of Hope, Dundalk, is acutely aware of the risks of broken bones, concussions or worse every time he mounts one of the powerful animals.

“It’s not a matter of if you get hurt, it’s a matter of when,” remarked a friend, as Mr. Herman prepared for a Jan. 24 competition at the Carroll County Agriculture Center & Shipley Arena in Westminster.

The adrenaline rush, challenge and brotherhood of the sport are what keep the 2002 Calvert Hall College High School, Towson, graduate and many of his fellow rodeo riders coming back for more.

Thrill of the ride

“It was a bucket list kind of deal,” said Mr. Herman, of his decision to head to the Sankey Rodeo School in North Carolina after earning a business management degree from Towson University in May 2008. “People said ‘You’re either going to love it and get addicted, or it’s not for you.’”

“There’s nothing like it,” said the Seattle native, who grew up attending rodeos. “The first time I rode a bull, I remember thinking it was the most amazing feeling in the world. I fell in love with it.”

As he and other rodeo riders do before every competition, Mr. Herman knelt in the dust of the arena Saturday night and bowed his head to recite the “Rodeo Cowboy’s Prayer.”

Led by rodeo veteran and the announcer for the evening, Chip Ridgely, a St. Peter the Apostle, Libertytown, parishioner, the riders prayed, “Lord, we ask only that you let us compete in this arena, as in life’s arena.”

As riders milled about in denim, leather cowboy boots and button-down shirts, someone remarked, “There is no way we could do what we do if there was no God. Faith is huge back here.”

Although the sizeable animals with large dark eyes, moist noses and long twitching tails appear as docile as pet dogs in their pens, names like Anger Management, Red Devil and Stress Test hint at the raw power the bulls will unleash as they storm into the arena. A rodeo rescue team is on hand should anything go wrong and riders wear foam vests to reduce the shock and impact of a fall.

“Honestly, beforehand, my stomach is in knots,” said Mr. Herman, who, along with his father, is a member of the Knights of Columbus at Our Lady of Hope.

Out in the arena, as dust flies and the kicking, bucking bull tries to dislodge its rider, Mr. Herman must grip a flat, braided bull rope tied around the animal’s body, using only his gloved riding hand. The bottom of the rope is weighted with a metallic bell, designed so that the rope will fall off when the rider lets go. Before the competition, he coats the bull rope with rosin, a substance which, when he runs his hands up and down the rope, will heat up and become sticky to offer a better grip. Judges score a rider on his constant control and ability to match his own movements with that of the bull. The animal is also judged – on everything from its kicks to its power and speed. The score for the ride ranges from zero to 100.
While Mr. Herman may have wanted to score well Jan. 24, his bull, #163 Turbo Charge, had other things in mind as he quickly and violently bucked his rider to the ground.

Mr. Herman kept any sense of disappointment tucked under his belt.

When it comes to the balance and coordination required by the rider, he noted, “a lot of it is mental. But the physical is pretty simple. You’re counter-throwing your weight to match his movements.” J-W Ranch www.jbarwranch.com