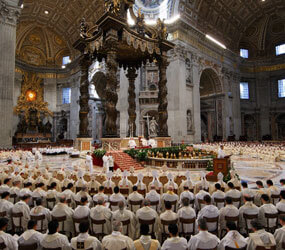 VATICAN CITY – Christians are called to a nonviolent struggle for peace and justice, including the civil disobedience of laws that are morally wrong, such as abortion, Pope Benedict XVI said.

“It is important for Christians to follow what is right, which is the foundation of peace,” he said April 1 during the chrism Mass in St. Peter’s Basilica.

“It is important for Christians to not accept a wrong that is enshrined in law – for example, the killing of innocent unborn children,” said the pope in his homily.

Presiding over the first of two Holy Thursday liturgies, Pope Benedict blessed the oils that will be used in the sacraments of baptism, confirmation, ordination and the anointing of the sick.

He also led more than 1,500 priests and bishops in a renewal of their ordination promises.

Deacons carried the oils in large silver urns to the main altar while catechumens, youths preparing for confirmation, the sick and deacons about to be ordained in the Diocese of Rome wheeled small tables carrying large, artistic urns, which also contained sacramental oils.

In his homily, the pope said Christians must be a people of peace who understand that Christ’s death on the cross is a sign of reconciliation and love.

“Christ does not conquer through the sword, but through the cross. He wins by conquering hatred. He wins through the force of his greater love,” he said.

Christ willfully succumbed to his torture and crucifixion, and the cross becomes his way of saying “no” to violence, the pope said. The cross no longer symbolizes death, but is a sign of God’s victory over violence through his self-giving love, he said.

“As priests we are called, in fellowship with Jesus Christ, to be men of peace; we are called to oppose violence and to trust in the greater power of love,” said the pope.

People of peace, however, are not inactive, he said; they have to be prepared for the nonviolent battle of upholding the truth and the good and of refusing to carry out evil.

Christians must be ready to suffer for the good and for God, he said. Like the martyrs they must say “no” to injustice and refuse to take part in idolatry, “to bow down before falsehood, before the adoration of human persons and their power,” Pope Benedict said.

As good citizens, Christians follow the law and do what is just and good, but “they do not do whatever within the legal system in force is not just but unjust,” said the pope.

The pope also said God brings a kind of happiness that is more complete and powerful than the kind of gladness that comes from entertainment and pursuits of pleasure.

While entertainment is good and it’s important to have laughter in one’s life, it is not everything, he said, and it can mask despair, dread or a disregard for one’s own life.

The happiness that comes from God gives people the strength to withstand suffering –- either one’s own or that of others – and to come to the aid of others and “to express tangibly the light and the goodness of God,” the pope said.

Pope Benedict then asked priests to pray that Christ’s gladness “may pervade us ever more deeply and that we may be capable of bringing it anew to a world in such urgent need of the joy that has its source in truth.”