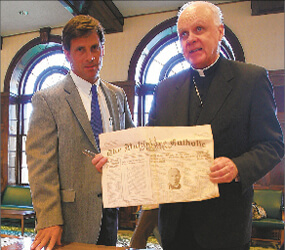 Jay Leno flaunts his fleet of custom automobiles, and Imelda Marcos was infamous for her shoe closet.

Frank M. Harvey Jr. seeks something less tangible. What does he collect?

Fortunately for the Archdiocese of Baltimore, Harvey likes to share his finds. When he phoned the Catholic Center in September with the information that he had some items that might be of historic interest, it was nothing new, as the family business that Harvey perpetuates has been putting a good face on Baltimore and its heritage for quite some time.

Harvey is the second-generation president of F.M. Harvey Construction Company.

Its latest project is rising at the site of the old Kirkleigh Villa in Roland Park. On Roland Avenue, just above the north terminus of University Parkway, the Daughters of Charity operated a residence there for older women from 1926 until 1966, when the archdiocese opened Stella Maris in Timonium.

The Marianists purchased the property for a retirement home, which operated until 2007. It remained vacant until Harvey’s company came along to demolish Kirkleigh Villa and make way for a similar retirement facility.

When they got down to the 1926 cornerstone Sept. 22, Harvey and foreman Buddy Kaufman weren’t sure what it would hold.

“We didn’t think of it as a church or school, an institutional building,” Harvey said. “What we found came out of the blue.”

While it held no financial treasures, it was a gold mine for anyone interested in the history of Baltimore and the archdiocese – and Harvey himself.

The cornerstone held a time capsule, a metal box about the size of the containers that sat on porches in the days of milk men. It held religious medals, one of Pope Pius XI; the 1926 archdiocesan yearbook; a document rolled inside what appeared to be a salt shaker; and several newspapers from the first week of April in that year.

“I’m not going to open the salt shaker, or the newspapers, I don’t want to damage them,” Harvey said in early October, showing the contents on his office desk in Hunt Valley.

When the time capsule was sealed, Babe Ruth was in the process of taking over baseball. At the height of prohibition, The Sun headlined H.L. Mecken’s latest tweaking of the populace, being charged in Boston for “corrupting the morals of the young.”

The Catholic Review reported persecution of the church in Mexico, and an item that touched a cord in Harvey, plans of the Vatican’s apostolic delegate to the United States to say Mass in Washington, D.C., at the crypt church that would become the Basilica of the National Shrine of the Immaculate Conception.

“My dad was from outside Boston, in Worcester,” Harvey said. “He went to work for Maginnis and Walsh and Kennedy, the architect for the basilica in Washington and the Cathedral of Mary Our Queen, in Baltimore (both completed in 1959). He moved south to be the liaison to the project manager at both buildings.”

In 1961, Frank M. Harvey Sr. founded his own construction company. A year later, Frank Jr. was born. The father bequeathed to his son not just his business, but a love for the church and its architecture.

Harvey received his first sacraments at St. Joseph in Cockeysville.

“The church there was one of my dad’s first projects in Baltimore,” he said.

Harvey went to its parish school, then Loyola Blakefield and the University of Richmond, before going to work for his father, who died in 1996.

The new church for St. John in Westminster, dedicated in 2003, was a Harvey project. So was the 2001 restoration of St. Paul in Ellicott City.

“We were tearing down the old altar, and found keepsakes from the Civil War,” Harvey said. “I gave them to the pastor, Father (Thomas) Donaghy. It was used as a hospital during the Civil War. It’s always exciting when you come across something from the past.”

Harvey was aware of Kirkleigh Villa’s before coming upon its time capsule. Lawyers for Capital Health Group, the co-developer of the new property, supplied perspective, as did Daughters of Charity Sister Betty Ann McNeil, archivist for the order.

The story begins with the Sisters of Charity of St. Joseph’s, based in Emmitsburg, opening an “Asylum and School” in Baltimore in 1821, the same year their foundress, St. Elizabeth Ann Seton, died. It became St. Mary’s Villa, and relocated to Roland Park in 1889.

“Elizabeth Jenkins, a sister to Sister Rose Jenkins, a Daughter of Charity, bequeathed her summer home “Kirkleigh” to the Archdiocese of Baltimore. Its sale made it possible for the Archdiocese to purchase a portion of the property at St. Mary’s Villa for the construction of a residence for elderly ladies able to function independently and pay for their care.”

Nearly three dozen Daughters of Charity served at Kirkleigh Villa during the 40 years that the order operated the residence.

“Sister Andrea MacVarish was the last sister servant, local superior, at Kirkleigh Villa,” Sister Betty Ann notes. “She served there for 10 years. She died in 2004 at 103, having been a Daughter of Charity for 81 years.”

The letter inside the salt shaker and other contents of the time capsule were put on display Nov. 3 at St. Mary’s Seminary and University, the repository of the archdiocese’s archives, and as Archbishop Edwin F. O’Brien, noted, the oldest seminary in the country.

He was most appreciative of Harvey’s gift.

“Serendipity,” Archbishop O’Brien said. “We’re extremely grateful to Frank. This is a wonderful addition to our archives.”