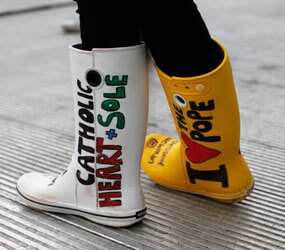 LONDON – Protesting the pope does not have to be a dreary affair.

And cheering him on can take a humorous tack as well.

Despite some media making dire predictions of hostility or complete indifference to the pope, the images of the throngs of people who lined the streets in Scotland and England Sept. 16-19 to see Pope Benedict XVI “reflect the country I’m familiar with,” said Francis Campbell, the British ambassador to the Holy See.

“People protest in this country – against the government, against many foreign leaders; they are entitled to protest,” he said, but “the right to protest is matched by a responsibility to allow others to be heard.”

At each site along the pope’s itinerary, protesters were present. Many of them were angered by the church’s handling of clerical sexual abuse, but the loudest voices were those of evangelical Christians who used megaphones near papal events to broadcast their claims that the pope is the Antichrist and that the Catholic Church actually leads people from Christ.

A bit of humor was scattered amid the anger and outright obscenity on signs carried by the approximately 10,000 protesters who walked through the city center Sept. 18 to protest government spending on the trip.

“Opium is better than religion,” said one sign, playing off Karl Marx’s assertion that “religion is the opiate of the masses.”

Papal supporters tended to lean more toward cute than clever, several going so far as to decorate their bright yellow Wellington rain boots with “I love the pope” messages.

There also was the hand-drawn sign, “We love U papa more than beans on toast,” referring to a favorite form of British comfort food: baked beans on toasted bread.
Niamh Maloney, who carried the sign to almost every event in London and Birmingham, told Catholic News Service: “We are unofficial members of the pope’s entourage. We’ve been walking for three days with these posters. I’m a papal stalker.”

Maloney, a youth minister for the Diocese of Northhampton, and her group also had a sign that said, “Holiness is the only X factor.”

The youth minister said that after so many negative stories in the media before the papal trip, “we just wanted a bit of a laugh.”

On the third day of the pope’s trip, the Vatican newspaper, L’Osservatore Romano, reported: “There will be some groups that demonstrate their legitimate dissent in some parts of the city, or media that exaggerate beyond all measure any event that gives rise to curiosity or apprehension. The fact remains, however, that Londoners are showing the pope a warmth and enthusiasm that goes beyond their proverbial aplomb.”

The famous London Mall, leading from Admiralty Arch to Buckingham Palace, was packed with thousands of cheering, shouting, whistling well-wishers as the pope made his way Sept. 18 to Hyde Park for a prayer vigil. Because the pope was making an official state visit to Great Britain, the Mall was lined with British and Vatican flags.