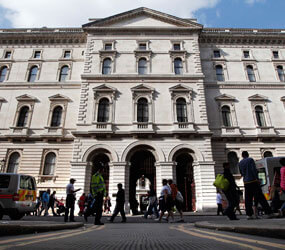 LONDON – The British government has apologized to the Vatican for an official memo that proposed the launch of “Benedict condoms” and the opening of an abortion clinic as part of Pope Benedict XVI’s visit to Britain.

Francis Campbell, British ambassador to the Vatican, met officials from the Vatican Secretariat of State April 24 to deliver the apology on behalf of the Foreign and Commonwealth Office.

At the Vatican, Jesuit Father Federico Lombardi, Vatican spokesman, told Catholic News Service “there had never been any uncertainty concerning the pope’s visit.” He said claims that the memo had created fallout were “completely baseless.”

The Vatican was made aware of a memorandum drawn up March 5 by members of the government team responsible for preparing the pope’s Sept. 16-19 visit to England and Scotland. It was one of three official background documents attached to a document inviting government officials for a meeting about the visit.

Under the headline “The Ideal Visit Would See …” the memo suggested the pope should bless a same-sex civil partnership, open an abortion clinic, and announce a ban on Catholic schools selecting pupils on grounds of faith and the reversal of church teaching against gay adoption. The memo recommended that the pope “announce (the) sacking of dodgy bishops” and “launch a helpline for abused children.”

According to reports in the British press, the memo suggested the pope might sing a duet with the Queen Elizabeth II to raise money for charity, suggesting that it should be titled “God Save the World” and sung to the tune of the British national anthem, “God Save the Queen.”

Although the pope’s itinerary had already been agreed upon, the ideas were proposed as part of a brainstorming session on how his visit could be improved.

The memo was circulated to government departments, including the prime minister’s office and the Department for International Development. But when the memo was leaked to two national newspapers in mid-April, the Foreign Office publicly distanced itself from its contents.

“This is clearly a foolish document that does not in any way reflect U.K. government or FCO policy or views,” said a government statement.

It said the individual responsible – understood to be a mid-ranking civil servant – has been transferred to other duties. The official has received a written warning, which he has accepted.

Scottish Secretary Jim Murphy, the minister in charge of the papal visit, denounced the memo during an April 25 pre-election debate televised on Sky.

“It’s absolutely despicable, these (proposals) are vile, they’re insulting, they are an embarrassment, and on behalf of I think the whole of the United Kingdom we’d want to apologize to His Holiness the pope,” Murphy said.

A spokesman for the Bishops’ Conference of England and Wales told CNS in a statement that the memo “does not reflect the constructive discussions we have had with government officials in the joint planning of the papal visit.”
“The memo has no place in serious and complex planning for this important visit,” the statement added.

“I think it’s a lot worse that we invite someone into our country – a person like the pope – and then he’s treated in this way,” the bishop said. “I think it’s appalling manners more than anything else.”

Ann Widdecombe, a former government minister and Catholic convert, told CNS April 26 that she believed the memo indicated an anti-Catholic culture within government.

“If it had just been a joke e-mail I would have brushed it aside, but it was an official document circulated to other departments, including Downing Street itself,” she said.

“It demonstrates above all else the contempt people in government have for Catholicism,” said Widdecombe.