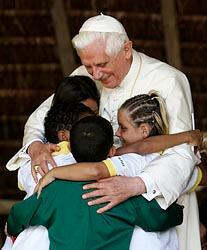 SAO PAULO, Brazil – The Brazilians stood quietly in a line, waiting for the nuns at the Monastery of the Immaculate Conception of Light to open the door and start handing out “Frei Galvao’s pills.”

Normally, the nuns distribute packets containing three pills to be taken within a nine-day period. The pills are tiny rice papers inscribed with a prayer, ingested by those in need.

The uncertainty as to whether or not the doors would open came from the fact that at that exact time May 11, less than two miles away, Pope Benedict XVI was canonizing Franciscan Father Antonio Galvao in front of several hundred thousand people.
“The first time I swallowed the pills I was 8 years old,” said Marta Monteiro, who this time brought her husband and teenage son. “I was sick and some aunts came to the monastery to get the pills for me.”

Monteiro said that when she was pregnant with her son she also came to receive the pills, which are said to help women in labor. Now, she said, she occasionally will stop by the monastery to obtain the pills.
Katia Cristina de Souza, 35, said she came to the monastery because she was unable to wait the long hours to see the pope and witness the canonization. De Souza was diagnosed with breast cancer in February; in March, when she started chemotherapy, she also started to come on a weekly basis to receive Frei Galvao’s pills.
De Souza, wearing a green bandanna to hide her loss of hair from the treatment, said she has begun to feel better, and that this improvement comes from the blessing granted to her by St. Galvao.
“For years I used to come here occasionally,” she said. “Now, in my hour of need, I feel Frei Galvao has not let me down.”
De Souza said the line for the pills is always long, no matter what day of the week she comes.

“People have always shown an enormous love for Frei Galvao, even before his sainthood,” she added.

Antonio Galvao was born in Guaratingueta, in the interior of Sao Paulo state, in 1739. After becoming a Franciscan in Rio de Janeiro, he was transferred to Sao Paulo. In 1774 he founded the Monastery of the Immaculate Conception of Light.

At the monastery, St. Galvao was asked to help a woman through a difficult childbirth. The friar is said to have written a prayer on a tiny piece of paper, which was swallowed by the woman. The woman and child survived the ordeal.
The prayer written on the piece of paper was: “After the birth, the Virgin remained intact; Mother of God, intercede on our behalf.”
After that, pregnant women as well as the sick came frequently to St. Galvao seeking his “miracle pills.”

The friar was beatified by the late Pope John Paul II in 1998 after Vatican recognition of a first miracle through his intercession: the 1990 cure of a 4-year-old child thought to have an incurable disease. In December, the Vatican recognized a second miracle: In 1999 a mother and her child survived a high-risk pregnancy after the woman swallowed Frei Galvao’s pills.

For years, Brazilians from all over the country and even some foreigners have come to the monastery seeking the pills. The nuns who manufacture the pills also send them through the mail.
Lucia de Paula said she comes at least once a month to obtain pills to send back to her hometown in Fortaleza, in northeastern Brazil. She said that eight years ago a friend from Rio de Janeiro told her about the pills. De Paula said she came to the monastery seeking the pills for her aunt, who had cancer and was given only a few months to live.
“With Frei Galvao’s pills she turned 86 years old last month,” she said with a smile.
There are those, however, like student Mosania Chavez, who came to the monastery May 11 for the first time. She said that although she is not sick she came to obtain the pills because she feels uneasy about her life.
“People say that these pills have the power to cure; maybe they will end my insecurities,” she said with a smile. She added that although she is a practicing Catholic she had never heard of the pills before the pope’s visit.
After more than an hour of waiting in line for the pills, followers were told that the doors would open in the early afternoon, after the canonization. For Monteiro, de Souza and de Paula, however, the delay was only a minor setback; they promised to return the following week.