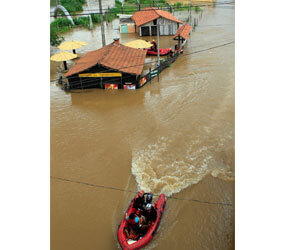 BRASILIA, Brazil – Brazil’s bishops launched a campaign to aid victims of severe flooding that has left more than 500 people dead.

Record rainfall in southeastern Brazil caused rivers to overflow their banks and triggered landslides that buried houses. News posted on the website of Caritas Brazil, the bishops’ aid and development agency, told of rescuers trying to help people who were trapped, as bodies swept by in the river.

The flooding has affected more than 1 million people in the states of Rio de Janeiro, Sao Paulo, Espirito Santo and Minas Gerais. Churches opened their doors to shelter people left homeless by the flooding and receive the bodies of victims.

In the Diocese of Petropolis, where two cities, Teresopolis and Itaipava, were especially hard hit, Bishop Filippo Santoro expressed the church’s “solidarity with the victims, those left without shelter or protection,” and said he was “making parish buildings available to aid the victims.”

In a statement issued Jan. 13, the Brazilian bishops said: “We are deeply saddened by the growing death toll and the victims who lost their loved ones and watched as their homes and possessions were destroyed. … We express our solidarity with the victims and call on Brazilian society to increase its donations to alleviate the pain and revive the hope of overcoming such an enormous tragedy.”

The massive flooding and landslides were the first major challenge for the new government of President Dilma Rousseff, Brazil’s first female chief executive, who took office Jan. 1. Fatal landslides happen periodically on steep hills in Brazil, both in rural areas and in crowded cities where shantytowns fill ravines between wealthier neighborhoods.

Rousseff blamed local governments for allowing people to build their homes in unsafe areas, while local officials said the national government had cut back disaster-prevention funds.