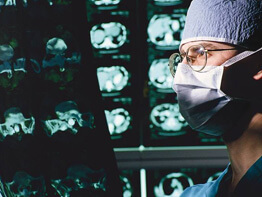 The intricate gray matter that makes up the human brain lays the foundation of critical thinking, but it’s the right and left hemispheres that provide most people with the determining factors in their individual strengths and weaknesses.
What is true for all people is the left hemisphere of the brain controls the right side the body, and the right hemisphere of the brain controls the left side of the body, said Dr. William Steirs, a psychologist with Johns Hopkins Physical Medicine & Rehabilitation at Good Samaritan Hospital in Baltimore.

However, not as definite is which hemisphere controls particular characteristics, such as artistic or mathematic qualities, Dr. Steirs said.

For the majority of humans, the left hemisphere of the brain controls sequential matters, such as language, words and handling details. The right hemisphere deals with simultaneous information, like visualizing a map.

The person who is left-brain dominant will probably find it is easier to follow directions in sequential units, while the right-brain dominant individual will most likely want to use the map, he said.
Brain hemisphere dominance can also direct people to specific career paths.

For example, engineers, accountants, proofreaders and computer programmers are most often left-brain dominant, because the work tends to be detail oriented, said Dr. Steirs.

“They tend to be more detail focused, analytical and quick to handle the individual elements in front of them,” he said. “They may have trouble seeing the big picture.”

Right-brain dominant individuals may gravitate to fields that require them to connect ideas and objects, such as writers, sculptors and mathematical theorists, said Dr. Steirs.

“They tend to focus more on the big picture and see connections between different ideas and see how visual and special patterns fit together,” he said. “They may be better at reading body language and facial expressions, but they may miss the details.”

Though people tend to be left- or right-brain dominant, everyone uses both sides of the brain, said Dr. Steirs.

“You hear all kinds of stereotypes and extremes about people who are left-side dominant or right-side dominant,” he said. “Like the accountant who is so focused on the details of adding up all of the numbers, but doesn’t look up to see that the building is on fire. People who are most successful have incorporated both sides of their brain and can switch back and forth.”

The biggest extremes in right or left brain function can be seen in people who have had some sort of brain injury, Dr. Steirs said.

For instance, individuals who have had a stroke on the left side of their brain tend to have trouble with verbal expression through language or understanding what other people are saying to them, he said.
Those who have had a stroke on the right side of their brain may have left-side paralysis and can’t see the big picture of a situation, but their language skills are just fine, said Dr. Steirs. “That person might have a detailed plan of how to drive to California, but doesn’t think to fill the car up with gas.”