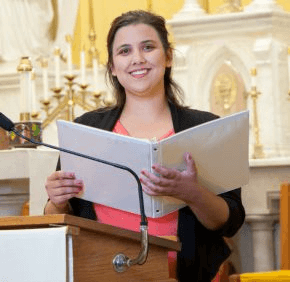 Christina Massimei, principal cantor of St. Stephen Parish in Bradshaw, still isn’t quite sure why she was asked to audition to be the cantor for the papal Mass in Washington, D.C.

Earlier this summer, Massimei was contacted by Thomas Stehle, the music director of St. Matthew’s Cathedral in Washington, who asked if she would audition for the Mass that will be celebrated by Pope Francis Sept. 23 to mark the canonization of Blessed Junípero Serra.

“Of course, I answered with a resounding yes,” said the 26-year-old resident of Bel Air.

Stehle then sent her the musical selections: four familiar church hymns and the Mass setting, and the psalm and Gospel acclamation that were commissioned for the papal Mass. Massimei sang for him in early August, then learned that she would be the cantor.

“I was just overwhelmed with joy,” she said. “I was in shock, but so joyous.”

The ticketed Mass will be celebrated in front of the Basilica of the National Shrine of the Immaculate Conception; 25,000 are expected to attend.

Massimei always knew she wanted to make music. Family lore has her singing in the shopping cart as a young child while her mother shopped for groceries.

“Even as a toddler, I can remember singing along to the jingles on the radio,” she said. “As I got older my love for music developed and matured, going from silly TV and radio jingles and children’s songs to classical musical theater repertoire such as Rodgers and Hammerstein and Leonard Bernstein, before eventually settling into the operatic genre.”

She added, with a laugh, “I listen to modern music on the radio.”

Massimei grew up in St. Ignatius Parish in Hickory, where she and her older sister, Maria, sang in the children’s choir. She also has a younger brother, Ralph.

“Some of my warmest memories are of singing traditional Catholic repertoire with my family during weekly church services,” she said. “It just seemed like a seamless tradition at the time – I had gone from the children’s choir to the adult choir to serving as cantor.”

At Bel Air High School, she played both clarinet and bass clarinet in the band, but fell in love with choral music when she tried out for the chorus. She sang in many choral ensembles in high school, and was 17 when she began formal training as a singer.

A full lyric soprano, she majored in music with a concentration in vocal performance at The Catholic University of America in Washington, where she studied under Elizabeth Daniels, a prominent vocal instructor with whom she still studies today.

Massimei works as a receptionist at the Bartlinski Chiropractic and Wellness Center in Pasadena, a job that dovetails with her interest in wellness and nutrition. At St. Stephen, Bradshaw, she sings at weddings and funerals, and, when her schedule permits, also serves as the cantor at St. Ignatius, Hickory.

“We’re very proud of Christina here at St. Stephen’s,” said Father Lawrence F. Kolson, pastor. “She’s a marvelous talent, a great gift she has received from God that she uses well – she serves the people of St. Stephen’s very well and generously with a genuine spirit of humility.”

She has experience singing at major events. Massimei was the cantor for the Mass celebrating the installation of Catholic University president John Garvey; sang at her college graduation baccalaureate Mass, which was also at the Basilica of the National Shrine of the Immaculate Conception; and has frequently been a soloist for the annual Christmas Concert for Charity, which airs on EWTN.

She has never been to Rome, but did catch a glimpse of Pope Benedict XVI when he visited Catholic University in 2008.

As a hobby, Massimei enjoys studying languages, which will be helpful since Pope Francis will celebrate the Mass in Spanish.

“I want to thank God that I’ve been given this opportunity,” she says. “I am very blessed.”