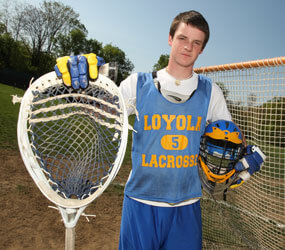 What do Blink-182 drummer Travis Barker and the best lacrosse goalies in the land have in common?

Both are keenly followed by Max Bradley, a Loyola Blakefield senior who is the last line of defense for the Dons’ lacrosse team and a drummer in the school’s liturgical and jazz bands.

“I know a lot of guys who play lacrosse and drums,” Bradley said, “and it seems that drummers tend to be goalies. I feel there’s a correlation among the two.”

His quick hands made him a founding member of the liturgical band, which provides inspiration at Masses on campus.

“Max,” said Loyola teacher Daniel Ranalli, the director of the liturgical band, “is an energetic and enthusiastic student who brings optimism, humor and a strong work ethic to all the activities in which he takes part. He is an excellent role model for younger students, both in the classroom and on the playing field.”

Bradley and his lacrosse teammates made sweet music April 20, when they posted a 7-6 victory over archrival Calvert Hall. Bradley said that it ended a losing streak to the Cards in football, basketball and lacrosse that dated to the 2008 Turkey Bowl.

It made for an interesting evening at the family dinner table, as his father, Jim, was a defenseman for Calvert Hall in the 1970s before playing for Washington College.

That would complete a Catholic education that began at St. John the Evangelist School in Hydes, where Bradley sits on the leadership team of the parish’s Teens in Ministry group.