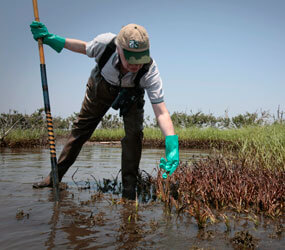 NEW ORLEANS – As millions of gallons of oil from an offshore rig explosion fouled hundreds of square miles in the Gulf of Mexico and advanced toward the Louisiana coastline, New Orleans Archbishop Gregory M. Aymond thanked BP for $1 million in emergency relief funds.

BP, which operated the oil platform that exploded April 20 and killed 11 workers, earmarked $750,000 to Catholic Charities of the Archdiocese of New Orleans for direct assistance such as gift cards to local grocery stores, case management and counseling, and $250,000 to Second Harvest Food Bank of Greater New Orleans and Acadiana for emergency food boxes.

The grant was announced at a May 18 news conference outside the headquarters of St. Bernard Parish, a civil jurisdiction equivalent to a county.

BP officials were hoping May 28 to contain the massive spill with a “top kill” procedure on the leaking pipe one mile underwater. Even if the plan was a permanent fix, the deposit of crude oil in the Gulf of Mexico has developed into one of the worst environmental disasters in U.S. history.

In response to the catastrophe, Catholic Charities has opened five emergency centers at local churches to distribute the financial aid and offer counseling to fishing families.

The sites are located in areas with large concentrations of fishermen: St. Bernard Church in the civil entity of St. Bernard, St. Thomas Church in Pointe a la Hache, St. Patrick Church in Port Sulphur, St. Anthony Church in Lafitte and Mary Queen of Vietnam Church in New Orleans East.

The $1 million grant will help fund outreach services for three months, and the program is likely to be extended if the impact of the oil spill grows, as almost everyone expects.

In thanking BP for its financial commitment, Archbishop Aymond asked for prayers that the oil will not destroy the local fishing industry, largely populated by small families who have made their living on the water for generations.

“We know that the people of St. Bernard, Plaquemines, Grand Isle and New Orleans East are people who persevere and have been through so many difficult and challenging times and have borne this cross before,” Archbishop Aymond said. “We’re grateful for the gift because we want to be in the front lines and continue in the front lines for a longer period of time.”

St. Bernard Parish President Craig Taffaro said the uncertainty of the eventual impact on fishing families was the toughest thing for them to handle.

“We have an undefined universe we’re dealing with,” Taffaro said. “Until that universe is defined, we’re continuing to have to make scenario guesses as to what we would have to do and how bad it will be or how much of an impact it will have on various people and aspects of our community.”

Father Gerard Stapleton, pastor of St. Patrick Church in Port Sulphur, said he wished he could tell his parishioners who are commercial fishermen that the oil disaster won’t be yet another life-changing event – as Hurricane Katrina was in 2005. But, he can’t.

“No one actually knows,” Father Stapleton told the Clarion Herald, newspaper of the New Orleans Archdiocese. “Are we looking at a month, three months, six months, 12 months or five years? What’s the effect on the land going to be? These fishermen basically have one trade in life, and that’s fishing. That’s where we enter into the area of uncertainty.”

Father Stapleton said he tries to be a good listener these days as fishermen release their pent-up anxieties. Sometimes, he draws strength from their simple faith. A fisherman he spoke to in a coffee shop recently told the priest not to fear.

“He told me, ‘The God who looked after us yesterday is the God who looks after us today, and he will also be with us tomorrow, and he will bring us through, just as he brought us through Katrina,’ ” Father Stapleton recounted. “I think that’s the best advice I have to offer to the people – that God has not abandoned us. In the midst of all this, ultimately what God looks for in his people is faithfulness in all situations.”

Since the beginning of May, nearly 5,000 individuals in the south Louisiana fishing community have benefited from emergency assistance from Catholic Charities of the Archdiocese of New Orleans.