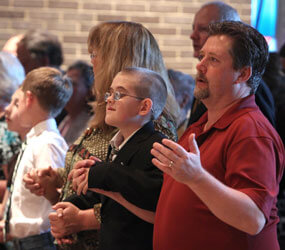 Eric Stag draped an arm around his parents, Anne and Jack, and smiled. Known for his hugs, Eric delivered the sweetest yet.

Five minutes earlier, on May 15, the 10-year-old parishioner of St. John the Evangelist in Severna Park received his first holy Eucharist.

“Just seeing him embrace the faith and coming to the Lord’s Supper for the first time, it’s bittersweet,” Anne Stag said of her son, who has Down syndrome. “I was thinking, ‘does he really understand? Are we doing it at the right time?’ Still there was this sweetness to it.”

For five families at the parish, emotions ran high. They walked to the front of the church along with Eric, Dylan Ambrose, 8, Scott Antlitz, 7, Brooks Bruno, 9, and Tyler Shallue, 9.

They bowed before the altar and watched the boys, each who has a special need, receive the sacrament for the first time.

The boys have studied together in the parish’s religious education program for more than two years. All but Eric Stag has a form of autism.

“I almost lost it,” said Brigid Bruno, mother of Brooks, who is non-verbal and uses a small machine to communicate

Lisa Shallue and Brigid Bruno each called John Poland, the parish’s director of religious education, in August of 2007 to inquire about faith formation. Soon, the other families came forward.

Shallue wanted Tyler, who has visual impairments, to learn Catholicism like her other children.

“We were just kind of feeling our way through,” she said of those early days.

Poland said the number of families made him want to reach out.

“I think God was telling us that this is something we needed to address,” he said.

Bill Fleming, the Archdiocese of Baltimore’s coordinator of catechesis for people with disabilities, said St. John’s class “affirms that our church is welcoming to everyone.”

Some might think receiving sacraments is not possible for children with special needs, but Lisa Shallue begs to differ.

“Not when it comes to my child,” she said. “I felt it was possible and we were going to have find a way to make it that way. Nothing is ever impossible.”

Families say they don’t have an “autistic child.” They have “a child with autism.”

They say they have a child first.

Tyler Shallue knew “the bread” he would eat was “the body of Christ.”

He practiced with his friends every Sunday and came to understand the sacrament’s importance.

He would not have reached that point without the careful guidance of catechist Carol Hamblin. The mother of a grown son who is profoundly deaf, she previously worked with the boys in summer school. Hamblin said the children are intuitive and not to be underestimated. She made lessons about the Eucharist accessible, using pictures, dolls and Play-Doh.

“Our expectations stop us,” Hamblin said. “If they’re too low, that’s where we stay. If we say ‘we can do this,’ let’s give the support to what it is we want to accomplish. I already knew they could do a lot.”

“She found a way to educate each child,” marveled Cheryl Antlitz, mother of Scott.

“Kids with special needs are very routine-oriented,” she said. “Yes, it’s a mystery and it’s a sacrament. It should not be taken lightly, but it is something that has to be natural and a routine in order for them to be comfortable.”

During his homily, Father James D. Proffitt, pastor of St. John the Evangelist, said the children, “are living witnesses amongst us.

When it came time for Communion, each boy walked up with his family. Father Proffitt broke the Eucharist off into a small piece and handed it to them. The boys were taking a major step in their faith. Mothers and fathers wiped away tears.

“These kids can do so much,” Anne Stag said. “I think each sacrament gets them closer to God. It places value in their life. We have to make these things available. They are God’s children.”