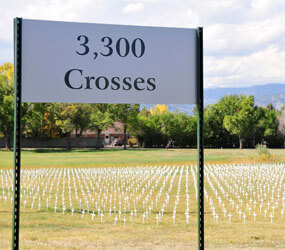 BOULDER, Colo. – A pro-life project to build and display 3,300 crosses in memory of the number of babies aborted daily drew more than 80 willing participants at Sacred Heart of Mary Church in Boulder.

“I was pleasantly surprised and encouraged about the many people in the parish who helped and might not otherwise be comfortable in pro-life activity,” said Charlie Danaher, who co-chairs the parish’s Respect Life Committee. “We had fantastic participation.”

From the initial idea for the project in February to the mass painting and staging sessions done at the church before October, parishioners had the opportunity to engage in a loving and noncontroversial pro-life activity, said Danaher.

The project, designed to relay the impact of abortion while encouraging healing for parents and support for prevention, was moving for parishioner Andrew Wolfe, who worked up to eight hours a day over four weeks assembling the thousands of crosses, and could not keep up with the rate of abortions.

“It was sometimes overwhelming to me, as fairly simple as are they are to assemble, that I couldn’t do it as fast as abortions were happening,” he said.

Wolfe worked with John Spritzer, also a parishioner, who built 4,000 of the 12-inch crosses at his home during Lent; he constructed 100 crosses a day for 40 days.

This was the first year the parish organized the pro-life project that received support from the church’s pastor, Father Marcus Mallick, and the Pastoral Council.

The Respect Life Committee decided to place the crosses in the vacant church property across the street. Suzie LaVelle, who also co-chairs the committee, said it is the perfect spot to display a pro-life message.

“The message truly is to give people hope and healing and a way to get that healing from previous abortions,” LaVelle said. “We have the perfect way to speak to lots of people that drive by.”

Along the road beside the white crosses is a sequence of six signs that can be read by motorists driving westbound or eastbound. The signs state the facts of abortion and the national hotline for Rachel’s Vineyard, a support group for women after abortions.

LaVelle said the statistics about abortion were taken from the Guttmacher Institute, a research and policy analyst of sexuality and reproduction issues and an affiliate of the Planned Parenthood Federation of America.

The signs were to stay up throughout October, observed as Respect Life Month.

Ultimately, those involved want the signs to give others hope and encouragement to seek support after abortions, LaVelle said.

Although they may not see the impact of the field of crosses, Wolfe said he hopes it will touch someone’s heart.

“It was the least I could do,” he said. “I think it was more a blessing for me to be able to physically do something to help.”