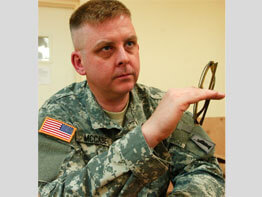 BRAINTREE, Mass. – A staff reporter with The Pilot, the newspaper of the Boston Archdiocese, will be deployed to Iraq to serve with the U.S. Army, and his mission will be to chronicle the lives and day-to-day experiences of a unit of soldiers over the next year.

Neil McCabe, who has been with the paper for the past five years, is a sergeant in the Army Reserve. He received orders to mobilize Feb. 8 with his three-soldier unit, the 311th Military History Detachment; after three weeks of training, the unit will go to Iraq March 1.

According to Sgt. McCabe, his unit will be “integrated into the command staff” of the 34th Infantry Division of the Minnesota National Guard – the “Red Bulls,” as they are known – currently stationed outside Baghdad.

To provide the most accurate historical documentation, McCabe and his unit will “collect as much data, oral histories, memoranda, photographs and interviews as possible” about significant events and send them to the Center for Military History in Washington. There, they will be digitally preserved to maintain an accurate historical account of the war.

The soldiers of the 311th trained for their mission for four weeks last summer at Fort McCoy, Wis., as part of the Patriot Warrior exercise.

“At the combat historian school, we all learn the quote: ‘History is the last thing we are about during operations and the first thing we want afterward. Then, it is too little, too late and too untrue,’” Sgt. McCabe said.

“Once the history is lost, it’s lost,” he added, noting that throughout history many wars have not been adequately documented, leading to a loss of specific historical details. Sgt. McCabe said that history units such as his are trying to ensure that does not happen in Iraq.

Prior to enlisting in the Army Reserve, he spent eight years on active duty in the Coast Guard.

Before writing for The Pilot, he was owner and editor of The Alewife, a monthly newspaper covering the neighborhood of North Cambridge from 2005 to 2007. He was the editor of The Somerville News from 2003 until 2005.

A lifelong lover of history, Sgt. McCabe is also currently working on a biography of Lt. Col. Charles W. Whittlesey, the commander of the “Lost Battalion,” who received the first Medal of Honor in World War I. In October, he visited “the pocket” in the Argonne Forest in France, to research where Whittlesey and his men were trapped by the Germans for six days.

“I am feeling pretty good about this adventure. I did not ask for it, but I welcome the chance to serve,” Sgt. McCabe said about his deployment to Iraq.

“So many others have held up this burden while I watched from the sidelines,” he said. “It is validating to be told your country needs you and believes you can complete the mission.”