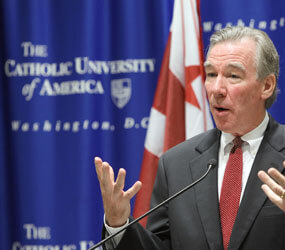 WASHINGTON – Officials at The Catholic University of America in Washington announced June 15 that John H. Garvey, dean of the Boston College Law School, will be the 15th president of the school.

The announcement at a campus news conference came after a national search and Vatican approval of his selection for the post, which is required for a pontifical university.

Garvey, 61, will succeed outgoing president Vincentian Father David O’Connell, who has been named coadjutor bishop of Trenton, N.J., by Pope Benedict XVI. Garvey will be the third lay president to lead the university, which was established by the U.S. bishops and opened for classes in 1889.

Detroit Archbishop Allen H. Vigneron, chair of the university’s board of trustees and head of the search committee, said Garvey is expected to continue the mission Bishop-designate O’Connell began 12 years ago to strengthen the Catholic identity of the school.

Bishop-designate O’Connell, the second-longest serving president of the only university founded by the U.S. bishops, told Catholic News Service in a May interview that he regarded the enriched Catholic identity of the school to be the crowning achievement of his tenure.

Garvey has been dean of the Law School at Jesuit-run Boston College since 1999. He served as an assistant to the solicitor general under President Ronald Reagan and also has been a law professor at the University of Kentucky and at the Catholic-run the University of Notre Dame in Indiana.

He is a married father of five and a 1974 graduate of Harvard Law School.

Garvey begins his job as president in July. Bishop-designate O’Connell, whose episcopal ordination is to take place July 30 at St. Mary of the Assumption in Trenton, is expected to briefly work with him to make for a smooth transition.