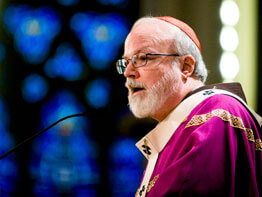 BOSTON – Boston Cardinal Sean P. O’Malley opened the bicentennial year of the Archdiocese of Boston by urging disillusioned Catholics to “come home” to the faith.

“Noah’s ark may have sprung a leak, but it is not sinking, and Christ is the captain. To our brothers and sisters in the life rafts, I say, ‘We love you, we want you to return to the practice of the faith, to the faith of our ancestors, the faith of the saints, the faith of the apostles,’“ Cardinal O’Malley said Dec. 2.

The Boston Archdiocese has been working in recent years to rebuild trust among Catholics in the wake of the sex abuse crisis and parish and school closings.

The cardinal made the invitation during his homily for the first Sunday of Advent at the Cathedral of the Holy Cross. The Mass opened a celebration that will follow the liturgical year and will end with the solemnity of Christ the King, Nov. 23.

In his homily, the cardinal recounted the difficult beginnings of the archdiocese in an area of the country where anti-Catholic sentiment was widespread and often backed by the force of law.

The Boston Archdiocese, along with the archdioceses of Louisville, Ky., New York and Philadelphia, was erected from the Baltimore Archdiocese in 1808.

“Sometimes we rhapsodize about the past, glamorize history and remember only what is pleasant. As a Catholic community in New England, we should know that our beginnings as a local church were fraught with hardship and hostility and with enormous sacrifices,” he said.

“Priests were not allowed into this colony. If a priest were to be found, he was to be banished. If he returned, he would be executed,” he continued.

When the archdiocese was founded 200 years ago, “the entire Catholic population of the diocese would not have filled this church. There were about 1,000 Catholics and two priests,” he added. “Those handful of Catholics of two centuries ago, have grown to over 5 million Catholics in New England today.”

The cardinal urged the congregation not to get so caught up in their daily routines “as to miss the moment that the Lord offers to us. To literally miss the boat, as those people did in Noah’s day.”

He also reminded his listeners that Christianity is “not a selfish search for salvation. It’s not ‘Jesus and me and the warm fuzzies,’“ he said. Instead, he described the Christian life as serving others and spreading the Gospel.

“We might feel more comfortable in our own lifeboat,” he added, “but Jesus wants us on Noah’s ark and it is ‘all hands on deck.’“

The cardinal asked those assembled to “recommit” themselves to the mission entrusted to the church, saying they should witness to Christ’s Gospel, pass on the faith and build a civilization of love.

“No, it will not be easy, but it will be good. The first 200 years of the church here in Boston have not been easy, but they have been good,” he said.

The cardinal also talked about the popular Christmas tradition of putting a candle in a window, saying it originally had two meanings. He said the candle symbolized a sign of welcome for the Holy Family looking for a place at the inn, and it also had once been “an invitation, during the times of persecution, to a priest to come and celebrate a clandestine Christmas Mass for the family.”

“Today, as we begin our bicentennial celebration, I am here to say that in Boston the candle is in the window,” he said.

Other events planned for the bicentennial year include an August youth celebration, a family day in each of the five regions of the archdiocese and a closing Mass planned for the Boston Convention and Exhibition Center. The archdiocese is also implementing a three-year program of spiritual renewal and evangelization called “Arise Together in Christ.”