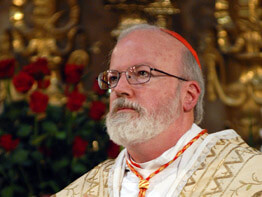 BOSTON (CNS) – In a column marking the fifth anniversary of the crisis over clergy sexual abuse of children, Boston Cardinal Sean P. O’Malley said that scandal was a “dark and unremitting truth” that had to be confronted.

Cardinal O’Malley’s comments appeared Jan. 7 as an opinion piece in the Boston Globe, the daily newspaper whose unrelenting expose of child sex abuse by priests in the Boston Archdiocese turned the secret of such abuse into a national crisis five years ago.

Cardinal O’Malley noted that on Jan. 6 Catholics celebrate the Epiphany,
“the manifestation of God’s love for all humanity.”

“Five years ago, as we marked the feast on Jan. 6, 2002, the devastating revelations that Catholic clergy had sexually abused children shook the Archdiocese of Boston and the wider community,” he said. “The contrast between the feast, which celebrates the light of Christ, and the dark and unremitting truth of clergy sexual abuse seemed, at first, impossible to accept.”

“But the truth of the abuse had to be confronted,” he added. “These crimes against children were all the more heinous because they were committed by men who vowed themselves to emulate Christ and were further enabled by the failure of the church leadership to respond appropriately.”

Cardinal O’Malley took the occasion of the anniversary to apologize again to all those who had been abused by priests. “Your wounded hearts and shattered spirits have a special claim on the church,” he said.

To their families, whose “trust was betrayed,” he said, “You will always remain in my heart and mind.”

“The impact of the clergy sexual abuse scandal has reached deep into the lives of parishioners and the faith-filled priests who minister to them. They have borne the shame, grief and confusion of these devastating revelations with heroic faith,” he said.

“During the course of the past five years we have learned much due to the generosity of so many who have committed themselves to the rebuilding of the church,” the cardinal wrote. “There is much yet to be done to regain confidence and trust. The feast of the Epiphany reminds us that the church’s mission is to make God’s universal love visible in the manner in which we live out our faith.”

The Globe’s investigative series on abusive priests focused especially on how successive archbishops of Boston regularly returned many of them to ministry after counseling or treatment, without effective measures to prevent contact with children.

The Globe coverage prompted other major newspapers across the country to conduct similar investigations, and as the crisis built nationwide the bishops took the unprecedented step of setting a strict national policy to be followed by all bishops in dealing with allegations of abuse and with those priests who were found to have sexually abused children.

The wide news coverage and new church policies led thousand of victims to come forward and report childhood sexual abuse by priests – in many cases revealing for the first time abuse that had occurred decades ago.

The crisis led to Cardinal Bernard F. Law’s resignation as archbishop of Boston in December 2002. Cardinal O’Malley replaced him the following July and quickly reached an $85 million settlement with more than 500 clergy abuse victims in the archdiocese.