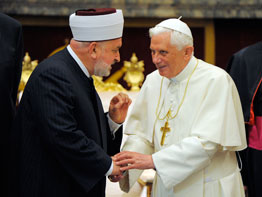 VATICAN CITY – Although he said he had been shocked by Pope Benedict XVI’s 2006 speech in Regensburg, Germany, the grand mufti of Bosnia-Herzegovina said he felt the best way to respond was to seek a dialogue.

Mustafa Ceric, the grand mufti, said he signed the 2007 letter, “A Common Word,” to Pope Benedict and other Christian leaders in order to “break the ice” and start a serious conversation.

The letter resulted in the Vatican and the scholars establishing the Catholic-Muslim Forum, which held its first meeting Nov. 4-6 at the Vatican.

Asked about the Regensburg lecture after the forum participants met the pope Nov. 6, Mr. Ceric said, “We Muslims at first took the pope’s lecture as a shock, and we were confused.”

Muslims were used to hearing the media portray Islam in a negative and stereotypical way, he said, “but when we heard that from the pope, that was a shock for us. To qualify the Prophet Mohammed, peace be upon him, as inhumane and Islam as an irrational religion, that was a shock.”

The pope had been quoting a medieval Byzantine emperor and later clarified that he was not endorsing the sentiment by using the quote.

Mr. Ceric said he and the other scholars who drafted and signed the letter to the pope wanted a conversation, a chance to explain their faith and educate Christians.

Mr. Ceric said the Muslim scholars’ Common Word letter was saying, “We have a dream to come together and see how we can work together for peace.”

The three-day meeting at the Vatican, which began with two short formal presentations followed by hours of free discussion each day, gave participants an opportunity to discuss the theological and philosophical roots of Catholic and Islamic teaching on love of God and love of neighbor.

It also gave the Muslim scholars a chance to explain the variety of cultures and trends found in the Muslim world and gave the whole group an opportunity to share concerns about human dignity and human rights, a discussion that reportedly included tough accusations from some of the Catholic leaders present.

The grand mufti told reporters that after the three-day meeting he was returning to Sarajevo happy and optimistic for the future.

“I’m going back to Sarajevo to report to my people, especially the young people, to my sons and daughters, that they will have a better future,” Mr. Ceric said.