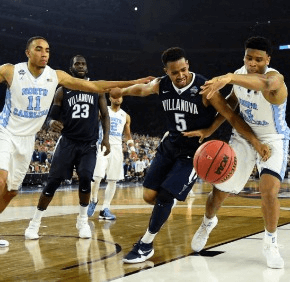 By Paul McMullen
pmcmullen@CatholicReview.org
Twitter: @CatholicReview.org
It was a particularly groggy morning at Mount St. Joseph High School in Baltimore April 5.
Gaels’ basketball coach Pat Clatchey, his players and much of the school community were up late the night before, watching Villanova University ride a surprising star turn by Phil Booth, Mount St. Joseph class of 2014, to the NCAA men’s basketball title.
Two years after he led the Gaels to their third straight Baltimore Catholic League title, Booth came off the Villanova bench and scored a team-high 20 points in their 77-74 victory over the University of North Carolina, an instant classic in Houston being described by veteran observers as one of the greatest college games ever.
Clatchey’s duties at the school include driving the morning bus from Severna Park to Baltimore’s west side for 13 Mount St. Joseph students and three from Mount de Sales Academy.
“I turned off my phone 20 minutes after the game ended, because wake-up is at 5 a.m.,” Clatchey said. “The first pick-up is at 6:35 a.m. Most of the kids are zombies at that time, but this morning they were saying, ‘Hey, Phil Booth is pretty good.’
“Everyone on campus is talking about what happened last night, even the kids who aren’t into basketball.”

Calvert Hall product Juan Dixon was the National Player of the Year when he led Maryland to the 2002 NCAA title. Carmelo Anthony, who had played for Towson Catholic, was similarly one of the nation’s best when he carried Syracuse to the championship the following year, as a freshman.
Booth, conversely, is the sixth man for Villanova. He came into the championship game averaging 6.7 points. He hit six of seven shots, however, including both of his three-point attempts, and all six of his free throws to post a rather timely career scoring high.
It was the kind of performance Pierre Johnson came to expect when he was an understudy to Booth, a two-time MVP of the BCL tournament and its Player of the Year two seasons ago.
“He’s a hungry guy, he works hard,” said Johnson, a Mount St. Joseph senior who was voted Defensive Player of the Year in the BCL this past season. “I learned a lot off the court from Phil, too. He’s a funny guy, spiritual, outgoing.”
Johnson finished his high school career by locking down the top scorer from Gonzaga College High School in Washington, D.C., in the fifth-place game at the Alhambra Catholic Invitational Tournament in Frostburg.
That’s the same Gonzaga High that produced Kris Jenkins, the Villanova big man who hit the game-winning shot against North Carolina. It plays in the Washington Catholic Athletic Conference, where Booth could have spent his high school days.
“As an eighth-grader, Phil (Booth) had a lot of options,” Clatchey said, of a player who grew up in Columbia, the son of a former Coppin State standout. “We’re pretty fortunate that he and his family decided that Mount St. Joseph was the best place for him to continue.
“Phil had a great career here. For the guys in our program to see someone who played here shine on the biggest stage the game has to offer, that has to be an inspiration.”
For the past six or seven years, Mount St. Joseph has sent a group to the team camp at Villanova, a Catholic college on Philadelphia’s Main Line. Jay Wright, the Wildcats’ coach, was the guest speaker at the BCL Hall of Fame dinner in 2014.
Booth was not the first Mount St. Joseph player to make a splash at the Final Four. Ten years ago, Will Thomas was the top inside player for George Mason University, one of the tournament’s great Cinderella stories.
The Villanova program includes Denny Grace, a walk-on from Calvert Hall, whose older brother, Tom, was on the Wildcats’ roster from 2001 to 2004.
Booth’s sixth player counterpart for the Syracuse women is Maggie Morrison, a junior out of Archbishop Spalding High School in Severn. The Orange are substantial underdogs against unbeaten and three-time champion Connecticut in the NCAA women’s final.

Inside Sports: Alhambra basketball keeps bringing them back to Allegany County