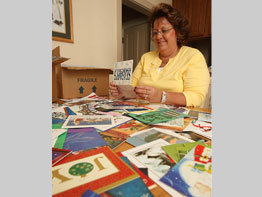 When he was in the hot desert serving his country near Fallujah, Iraq, getting a letter from home was always a much-welcomed diversion for Kevin Hurlbrink. Hearing about loved ones back in his hometown of Boonsboro helped give him strength, he said, reminding him how much he was loved.

Other soldiers weren’t so lucky.

“There was a fellow on my team from California who never received anything,” remembered Mr. Hurlbrink, a 27-year-old former parishioner of St. James in Boonsboro who served in Iraq five years ago and who now lives in West Virginia.

“Week after week, he’d see his buddies pulling down packages with tons of candy and snacks and cards and he didn’t have anything,” said Mr. Hurlbrink. “It began to wear on him.”

All it took was one mention of his friend’s plight for Lynn Jones, Mr. Hurlbrink’s mother, to do something about it. The longtime St. James parishioner and member of the Catholic Daughters of the Americas had formed a regional military support group at St. James soon after her son’s 82nd Airborne Division deployed in 2003. Kelly Zemora, her daughter, was also serving in Iraq in the war zone some 50 miles from her brother.

Just before the holiday season of that year, Ms. Jones launched a card-collecting drive that gathered 10,200 cards for troops serving in Iraq, Afghanistan and Kuwait. She sent many of them to her children to share with the servicemen and women.

“I remember passing out thousands of cards in camp,” said Mr. Hurlbrink. “Everyone was very appreciative and taken aback that someone would take so much time and energy to do something she wouldn’t benefit from.”

The collection drive has become an annual event, growing in momentum each year. Ms. Jones mailed 119,434 cards in 352 boxes last year. This year’s drive has started a little slowly, according to Ms. Jones. People are not as conscious of the troops serving overseas as they were just a few years ago, she said.

Ms. Jones is asking parishioners and schoolchildren throughout the Archdiocese of Baltimore and beyond to send cards so no one is forgotten.

“It doesn’t take much to write a card,” said Ms. Jones, a tractor trailer driver for Food Lion. “You have no idea what one card can do.”

Ms. Jones remembered receiving a large package from Iraq two years ago soon after sending her annual cache of cards. Inside was a teddy bear from an anonymous soldier with a thank-you note attached saying, ‘Someone in Iraq loves you.’

“I couldn’t begin to tell you how much that’s meant to me,” she said.

Ms. Jones and a small team of volunteers read every card that is donated before shipping them. She encourages donors to write messages of support and to sign them. The military mom also collects the names of servicemen and women in Iraq, Afghanistan and Kuwait so personalized cards may be sent. In addition to the cards, Ms. Jones sends donated holiday candy, rosaries, beef jerky, toiletries and other small gifts.

Ms. Jones accepts cash donations to pay for postage, which is estimated at $5,000. Any money that is left over is given to the Fisher House, an organization that supports the families of severely injured servicemen and women.

“It’s such a humbling experience and a great blessing to be involved in this,” said Ms. Jones, who already has 1,000 cards and whose enclosed front porch will be crowded to the rafters by the end of the card drive, Nov. 20.

For those sending cards, Ms. Jones gave the following guidelines: recognize that the card will be read by many people, do not send envelopes, do not send blank cards and always sign the card. Cards may be homemade or bought. No postage is necessary.

“If we can make just one person’s holiday better, then it’s all worth it,” she said.